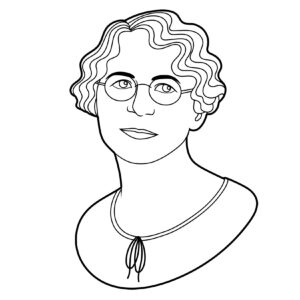 In the span of 13 years, Ynés Mexia became the most accomplished female botanist and explorer of her time. She started her career in botany at age 55, and her legacy includes over 145,000 collected specimens. 500 of these were newly discovered species, and 50 of them have been named after her. Her collections are still studied and showcased all around the world.

Ynés Mexia was born in 1870 in Washington, D.C. to a Mexican diplomat and an American woman. The couple separated when she was very young, and she spent most of her childhood on a ranch in Texas with her mother. At age 27, she married in Mexico, but was widowed only five years later. She remarried, but after a psychological breakdown she left her second husband and moved to San Francisco in 1909. There, she became a social worker, and joined the Sierra Club, a hiking and nature protection group.

In 1921, at age 51, she started taking Natural Science classes at the University of California, Berkeley, which sparked her interested in botany. Her major contribution to the field of botany started in 1925, when she joined a field trip to Sinaloa, Western Mexico with botanist Roxanna Ferris from Stanford University. On that trip, she fell off a cliff, fracturing her ribs and injuring her hand, but she persevered. This anecdote is often mentioned as testament to her toughness and drive. At some point, she decided that she would make more progress on her own, and she continued without the group.

In 1928, Mexia was hired to explore Mount McKinley in Alaska. In late 1929, she embarked on an expedition to South America. She travelled for two and a half years, during which she canoed down the Amazon River for almost 3,000 miles (4,800 km) to its source in the Andes. She collected over 65,000 specimens. To inventory this collection, Mexia had the help of Nina Floy Bracelin, her collection manager, who prepared and labelled the specimens for their categorization by specialists.

Mexia did not complete her Bachelor’s degree, but was known in her field and was often invited to lecture during her trips. She wrote about her expeditions in the Bulletin of the Sierra Club, and in 1932 she published the book Brazilian Ferns Collected by Ynés Mexía in collaboration with Edwin Bingham Copeland. She made two other major expeditions, to South America in 1934 and to Mexico in 1936.

Ynés Mexia died on July 12, 1938, at age 68, of lung cancer diagnosed one month prior. She left most of her funds to conservation efforts, including the Save the Redwoods league and the Sierra Club. She also left a fund for her collection manager, Nina Floy Bracelin, to be hired as an assistant by the Canadian-American botanist Alice Eastwood.