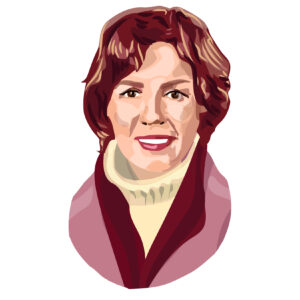 Wanda Rutkiewicz was an electrical engineer, climber, author, documentary film maker, and advocate for women climbers. Rutkiewicz was the third woman to reach the summit of Mount Everest, and the first Pole. Eight years later she became the first woman to climb the world’s second-highest peak, K2, doing so without using supplemental oxygen. Rutkiewicz completed eight 26,247-foot-plus (8,000-meter-plus) climbs. She is often noted as the one of the greatest female climbers of all time.

Rutkiewicz was born on February 4, 1943, in Plunge, Lithuania. Her family left for Poland after World War II and settled in Wroclaw. She studied electrical engineering at Wroclaw University of Technology. She rode a Polish Junak motorcycle, which inadvertently got her into climbing. One day in 1961, her motorcycle ran out of fuel and a person stopped to help. Bogdan Jankowski, also a motorcyclist, was a climber. Due to this chance meeting, Rutkiewicz joined him on a climb in the Falcon Mountains to Janowice Wielkie. This is thought to be the start of her interest in mountaineering.

Her climb of the Pamir Mountains with Andrzej Zawada, a Polish mountaineer, was her first major expedition. Soon after, she started to lead her own expeditions, including female only climbs. On October 16, 1978, she became the first European woman, first Pole, and third woman to reach the summit of Mount Everest. In 1986, she was the first woman to climb K2, which she did without supplemental oxygen.

Wanda Rutkiewicz died in May 1992, at age 49. She died while climbing Kanchenjunga, the third highest mountain in the world, located between Nepal and Sikkim, India. Her body has not been found, but her disappearance is dated May 12 -13. She started the ascent with Mexican climber, Carlos Carsolio, at 3:30 AM on May 12 from camp IV at 26,083 feet (7,950 m). They climbed for about 12 hours with heavy snowfall, but Carsolio was the only climber to reach the summit. While descending, he saw Rutkiewicz between 26,900 – 27,230 feet (8,200 – 8,300 m). While Carsolio tried to convince her to descend with him, she decided to improvise a shelter and attempt the summit the next day. This was the last time she was seen. On October 16, 2019, Google Doodle gave a tribute to Rutkiewicz on the 41st anniversary of her Mount Everest success.