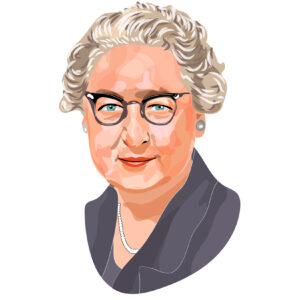 Virginia Apgar was a specialist physician, pioneer in the field of anesthesiology, obstetrics, and creator of the Apgar Score. Apgar created a system which helped lessen the infant mortality rate between the 1930s and 1950s. The Apgar Score rated infants in one minute after birth, and helped to determine their overall health in those first critical 24 hours. By the 1960s, most U.S. hospitals had implemented her system.

Born on June 7, 1909, in Westfield, New Jersey, Apgar was privy to disease as she had a brother with chronic illness; losing another to tuberculosis. In 1929, Apgar graduated from Mount Holyoke College with a degree in zoology, then finished her medical degree in 1933 at Columbia University College of Physicians and Surgeons (P&S). Her residency of surgery finished in 1937.

Despite her promising performance in surgery, her mentor and the chair of surgery, Dr. Alan Whipple discouraged her from continuing. He worried that economic prospects for woman surgeons would be poor during the Depression and suggested she pursue anesthesiology. At the time, anesthesiology was a new medical specialty. Apgar accepted this advice. Whipple believed that innovations and improvements were needed in anesthesia if surgery was to advance. He saw in Apgar “the energy, intelligence, and ability needed to make significant contributions in this area.”

At the University of Wisconsin–Madison, Apgar trained as the only woman, in the first anesthesiology department in the U.S. Receiving her certification as an anesthesiologist in 1937. She became director of the newly formed division of anesthesia at P&S in 1938.

Apgar developed the field of anesthesiology in the 1940s through her roles as administrator, teacher, recruiter, coordinator, and physician. In 1949, Columbia University Vagelos College of Physicians and Surgeons accepted her as the first female professor. Apgar simultaneously held this position for a decade, alongside the position of clinical researcher at the Sloane Hospital for Women.

In 1952, Apgar defined the first standardized method for assessing a newborn’s health, known as the Apgar Score (Appearance, Pulse, Grimace, Activity, Respiration). Starting in the United States, it reduced infant mortality while building the foundations of neonatology. By the late 1950s, Apgar had attended over 17,000 births. Most hospitals in the United States had implemented her system by the 1960s and it was adopted by many other countries subsequently.

In 1959 she completed a master’s degree in public health at Johns Hopkins School of Hygiene and Public Health, and then headed a new Division of Congenital Malformations with the March of Dimes. Apgar rallied for vaccinations to prevent mother-to-child transmission of rubella, a pandemic between 1964–65, and implemented the effective use of Rh testing-ultimately reducing miscarriages.

As lecturer (1965–1971) and then clinical professor (1971–1974), Apgar held the first faculty position as clinical professor of Pediatrics at Cornell University School of Medicine, where she taught teratology (the study of birth defects). The Johns Hopkins School of Public Health appointed her lecturer of medical genetics in 1973.

Virginia Apgar died August 7, 1974, in New York at age 65. The culmination of her work included numerous degrees, academic professorships, and over 66 ground breaking publications. Her book written in 1972, Is My Baby Alright? aimed for the betterment of family welfare through education. She saved countless lives; minimizing suffering with her efforts to educate mothers and teens about preventative measures surrounding pregnancy, childbirth, and birth defects.