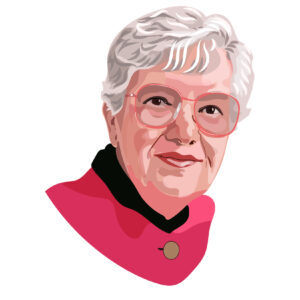 An astronomer, Vera Rubin explored the galaxies beyond planet Earth. Fueled by love for science and the stars, she is remembered today as a role model, mentor, and boundary breaker in science and astronomy. Credited for her discoveries of dark matter and her theories for rotational curves, Rubin is one of the 50 most influential women in science. With over 150 scientific publications, multiple books, and five honorary doctorates, Rubin is remembered as a ‘national treasure’ and a ‘guiding light’.

Vera Florence Cooper Rubin was born in Philadelphia, Pennsylvania on July 23, 1928, to an electrical engineer, Philip Cooper, and Rose Applebaum. After moving to Washington DC in 1938, Vera watched the stars from her north-facing window, sparking her interest in astronomy. Here, she began observing meteors with a cardboard telescope made with her father. Ignoring advice to become an artist, Rubin became the sole undergraduate student to graduate with a Bachelor’s degree in astronomy from Vassar College in 1948. Unable to attend Princeton University or Harvard University due to her gender, she pursued graduate studies from Cornell University in 1951, before earning her PhD from Georgetown University at the age of 26. While pursuing her education, Rubin raised four children with her husband Robert Rubin, all of whom hold PhD degrees in science and mathematics today.

Vera spent the next decade teaching Physics, Mathematics, and Astronomy at various institutions before joining the Carnegie Institution of Washington in 1965. With Kent Ford, an astronomer who had developed an intricate spectrometer, Rubin focused on the dynamics of galaxies. She became the first woman to observe at the Palomar Observatory, where she began working on the controversial research known today as large-scale streaming. After spending time researching quasars and galactic motion, Rubin focused on rotational curves leading to her discovery that the galaxy contains 5%-10% as much dark matter as it does white matter; evidence of a controversial theory proposed by Fritz Zwicky in the 1930s. Her interests in counter-rotation led to theoretical evidence and further research into galaxy mergers and galaxy formation processes.

Inspired by her own experiences with gender bias, Rubin spent her lifetime actively advocating for equal treatment and greater recognition of women in science and scientific literacy. She supported, mentored, and urged women to follow their scientific dreams, urging the National Academy of Sciences to elect, select, and include more women in review panels and academic searches.

On December 25, 2016, Vera Florence Cooper Rubin died of complications associated with dementia. In honor of her scientific research, the Carnegie Institute awards the Vera Rubin Early Career Prize for postdoctoral research in astronomy annually. She is remembered in space by Vera Rubin Ridge, an area on Mars, and 5726 Rubin, an asteroid. In 2019, the Large Synoptic Survey Telescope was renamed the National Science Foundation Vera C. Rubin Observatory. She is featured in the final episode of Cosmos: A Spacetime Odyssey. Through her two books, 150 scientific papers, multiple theses, and long-ranging mentorship, Rubin had hoped that her data would be used for years down the road. “We have peered into a new world and have seen that it is more mysterious and more complex than we had imagined. Still, more mysteries of the universe remain hidden. Their discovery awaits the adventurous scientists of the future. I like it this way.”