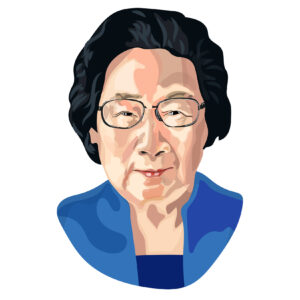 Tu Youyou is a pharmaceutical chemist and malariologist, born and educated in China. Referred to as the “Three-Without Scientist”, Tu discovered tropical medicines used to treat schistosomiasis and malaria without a doctoral degree, work or research experience abroad, or affiliations with national academies. In 2015, in honor of her work with artemisinin, she became the first Chinese Nobel Laureate in Physiology or Medicine and the first Chinese woman to receive a Nobel Prize. In 2009, she published an autobiography.

On December 30, 1930, Tu Youyou was born in Ningbo, Zhejiang, China. Her inspiration to pursue medical research stemmed from a tuberculosis infection, which interrupted her high-school academic years. Upon graduation in 1951, she attended Beijing Medical College. In 1955, after receiving a bachelor’s degree in pharmaceutics, Tu expanded her research on Chinese herbal medicine at the China Academy of Chinese Medical Sciences. After two and a half years of training in traditional Chinese medicine, Tu began work at the Academy of Traditional Chinese Medicine in Beijing.

During her early years of research, Tu focused on a traditional Chinese medicine, Lobelia Chinensis, which could cure schistosomiasis, a widespread infection in 20th century South China. In 1969, Tu was appointed head of the Project 523 research group, a secret drug discovery project to combat the deadly spread of malaria amongst soldiers throughout southern China. After studying infected patients in Hainan, Tu began screening Chinese herbs for possible malaria remedies. She traveled to meet with classic Chinese herbal practitioners across the country, documenting over 640 discoveries in a notebook titled A Collection of Single Practical Prescriptions for Anti-Malaria. Between 1969-1971, her team tested 200 of the 380 herbal abstracts made from over 2,000 recipes and found that Artemisia annua, sweet wormwood, was an effective compound used to treat intermittent fevers. Tu studied the chemical structure and pharmacology of artemisinin and volunteered as the first human subject in the drug’s clinical trials.

In 1980, following the Chinese economic reform, Tu was promoted to the academic rank of Researcher, the highest researching rank in mainland China. Although she is a “Three-Without Scientist,” a scientist without a postgraduate degree, experience abroad, or affiliation with Chinese national academies, she worked as an academic advisor to doctoral candidates. Living with her husband, Li Tingzhao, and two daughters in Beijing, Tu Youyou serves as the Chief Scientist at the Academy of Traditional Chinese Medicine.

Although China honored Tu Youyou with the National Science Congress Prize and National Inventor’s Prize in the 1970s, she has only recently been internationally recognized. In 2011, she received the GlaxoSmithKline Outstanding Achievement Award in Life Science, the Lasker-De-Bakey Clinical Medical Research Award, and the Outstanding Contribution Award. In October 2015, she was the co-recipient of the Nobel Prize in Physiology or Medicine for her discoveries against malaria. She holds the Highest Science and Technology Award and the Order of the Republic in China. In her own words, “Every scientist dreams of doing something that can help the world. I do not want fame. When you are entrusted with an assignment, you do your best.”