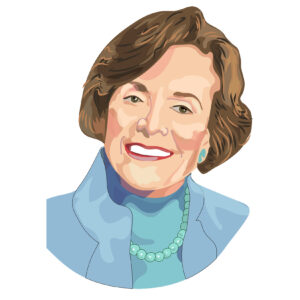 Dr. Sylvia Earle is President and Chairman of Mission Blue and the Sylvia Earle Alliance. She was the first female chief scientist of the U.S. National Oceanic and Atmospheric Administration and a National Geographic Explorer in Residence. Dr. Earle is a world-renowned oceanographer, explorer, author, and lecturer who has spent over 7,000 hours underwater and has led over 100 expeditions. After receiving over 100 national and international honors, Dr. Earle has earned her nickname, “Her Deepness.”

Sylvia Alice Earle was born on August 30, 1935, in Gibbstown, New Jersey. Her nature-loving parents taught Sylvia and her two siblings to respect wild creatures. Her early years were spent on a small farm in New Jersey where she explored nearby woods. Her family moved to Florida when she was 12 years old where she fell in love with the Gulf of Mexico. Their house was on the water and Earle investigated species in salt marshes and sea grass beds.

Earle received scholarships to Florida State University where she studied marine botany and learned to scuba dive. She supported herself financially by working in college laboratories. During her master’s program at Duke University, Earle studied algae in the Gulf of Mexico. After starting a family, Earle completed a PhD and postgraduate experiences of research and oceanographic exploration. In 1964, Earle took part in a 6-week research of the Indian Ocean where she was the only female in a crew of seventy members. She served as resident director of Cape Haze Marine Laboratories in Florida, a research fellow at Harvard University, and a research scholar at the Radcliffe Institute.

During a time when a career in science was almost impossible for women, Dr. Earle led the first all-female team of aquanauts on the Tektite II project in 1970. The Tektite project allowed teams of scientists to live 50 feet below the surface off the Virgin Islands. This expedition gained publicity and Dr. Earle received more opportunities to speak in public and advocate for research. Around this time, she began producing books and films about the oceans with the National Geographic Society. She also became a curator and research biologist at the California Academy of Sciences.

In 1979, Dr. Earle walked untethered on the seafloor deeper than anyone had before. She took a submersible to 1,250 feet (366 m) off of Oahu and wore a JIM suit, which maintains an interior pressure of 1 atmosphere. She explored the deep sea on her own for two and a half hours, which she wrote about in her book Exploring the Deep Frontier. She started the companies Deep Ocean Engineering and Deep Ocean Technologies, which build undersea vehicles like Deep Rover and Deep Flight.

In the 1990s, Dr. Earle served as Chief Scientist of the National Oceanographic and Atmospheric Organization where she monitored the health of the nation’s waters and reported on environmental damage. Most recently, Dr. Earle led the Google Ocean Advisory Council for Ocean in Google Earth. Through her organization, Mission Blue, she is establishing a global network of marine protected areas referred to as hope spots.