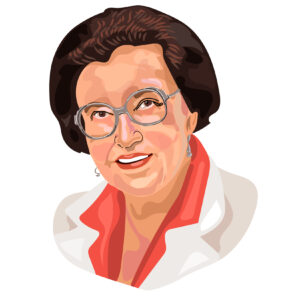 Rosalyn Sussman Yalow was an American medical physicist and made contributions to the fields of physics and biological research. In 1977, she was the co-winner of the Nobel Prize in Physiology or Medicine for her role in the development of the radioimmunoassay. She was the second woman, and first American-born woman to be awarded a Nobel Prize in this category. She was inducted into the National Women’s Hall of Fame in 1993.

Rosalyn Sussman Yalow was born on July 19, 1921, in the Bronx, New York. After attending high school, she studied physics at Hunter College in New York City. After graduating in 1941, Yalow pursued a graduate degree. She received a teaching assistantship in physics at the University of Illinois. While at the Chicago-Urbana campus, she was the only woman among the 400 members of the faculty of the College of Engineering. She was the first woman there since 1917. During her time at the University of Illinois, Sussman met and married fellow student Aaron Yalow before completing her PhD in 1945.

After graduate school, Yalow accepted an assistant electrical engineer position at Federal Telecommunications Laboratory, but in 1946 she decided to return to Hunter College to teach Physics. Yalow served as a physics lecturer from 1946-1950, and during that time became a consultant to the Bronx Veteran’s Administration Hospital. The Veteran’s Administration aimed to establish a research program to use radioactive substances for medical purposes, and Yalow left teaching to devote her full attention to this research. At the Bronx VA Hospital, she collaborated with Solomon Berson and developed radioimmunoassay. This technique uses radioisotopes to measure small quantities of biological substances in human blood and other fluids. The assay was originally used to detect insulin concentrations in diabetic patients, but has been applied to accurately measure other substances including hormones, vitamins, and enzymes.

Yalow was appointed research professor in the Department of Medicine at Mount Sinai Hospital in 1968. Her research earned her many awards including the Eli Lily Award of the American Diabetes Association, the Gairdner Foundation International Award, the American College of Physicians Award, the William S. Middleton Award for Excellence in Research, as well as the Koch Award of the Endocrine Society. In 1975, she was awarded the American Medical Association Scientific Achievement Award with Solomon Berson, and the following year was the first female recipient of the Albert Lasker Award for Basic Medical Research. In 1977, Yalow became the first American-born woman to receive a Nobel Prize in a scientific field. Along with Roger Guillemin and Andrew Schally, Yalow was the co-recipient of the Nobel Prize in Physiology or Medicine.

Rosalyn Sussman Yalow passed away on May 30, 2011, at the age of 89 in the Bronx, New York. She is noted as saying, “The world cannot afford the loss of the talents of half of its people if we are to solve the many problems which beset us.”