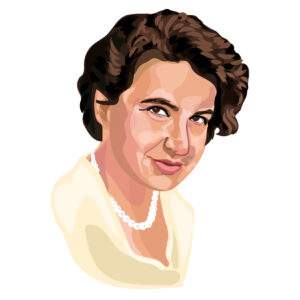 Rosalind Elsie Franklin was an English chemist and X-ray crystallographer, a scientist that determines the atomic and molecular structure of crystal.  Her work was fundamental to the understanding of the molecular structures of DNA (deoxyribonucleic acid), RNA (ribonucleic acid), viruses, coal, and graphite. Her impacts on the discovery of the structure of DNA were mostly unrecognized during her lifetime.

Franklin was born on July 25, 1920, in Notting Hill, an affluent district of West London, England. She attended St. Paul’s School for Girls, which focused on preparing students for careers. With an early aptitude for math and science, Franklin attended Newnham Women’s College at Cambridge University where she studied chemistry and physics. After leaving Cambridge, Franklin gained employment with the British Coal Utilization Association (BCURA) where she was an advisor to the military. She focused her studies on topics relevant to the war effort, researching the properties associated with coals and graphite. She helped classify coals and their uses for fuel processes and the production of wartime devices such as gas masks. This research formed the basis of her culminated in her PhD dissertation, “The physical chemistry of solid organic colloids with specific reference to coal.” After which she turned her attention to organic molecules. Along with her cousin Irene Franklin, Rosalind regularly made patrols to ensure the safety of people during air raids as a volunteer Air Raid Warden.

Working on the molecular structure of coal allowed her to move to Paris in 1946 to refine her skills in X-ray crystallography, an experimental science using X-ray technology to produce a 3D image of a crystal’s electrons, allowing a scientist to determine the positions of atoms and chemical bonds within a given crystal. This work was foundational for Franklin when she returned to London in 1950 after accepting a position at King’s College, London.

Alongside Maurice Wilkins, Franklin was tasked with finding the structure of DNA. Both scientists, though passionate about their work, suffered from an early misunderstanding, resulting in a working environment where both Wilkins and Franklin worked in relative isolation rather than as a team. The animosity between the two ultimately led to Franklin’s discredit in the uncovering of DNA’s double helix.

When Wilkins and Franklin began to work separately, Wilkins turned to his friend Francis Crick at Cambridge, who was working with James Watson to construct a model of the DNA molecule. During this time, Franklin had been using X-ray diffraction to look at the structure of DNA and was able to determine a helical shape. When Wilkins sought out Crick for a professional partnership, he brought some of Franklin’s X-ray diffraction photos and research with him. Unbeknownst to Franklin, these photos provided the foundation for Watson and Crick’s now-famous DNA model. The pair went on to publish their classic theory in a 1953 issue of Nature; Watson and Crick did not acknowledge their access to Franklin’s photos and unpublished research during her lifetime.

After working on her DNA model, Franklin took a job at Birkbeck College where she studied the molecular structure of the tobacco mosaic virus. This work provided her the opportunity to travel the world lecturing on the internal structures of viruses and coal.

Rosalind Elsie Franklin died on April 16, 1958, at the age of 37 due to complications of ovarian cancer. After her death, Crick and Watson acknowledged her vital contributions to their DNA model, which revolutionized the study of genetics. Franklin received an honorary Louisa Horwitz Prize, awarded posthumously for her seminal contributions to discovering DNA structure.