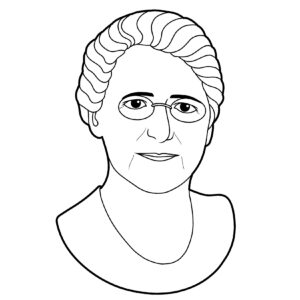 Rachel Workman MacRobert was an American geologist that grew up in Europe. She was the daughter of mountaineer Fanny Bullock Workman and was one of the first three female fellows of the Geological Society of London. MacRobert was elected as a life fellow of the Royal Society of Arts in 1938. She is the founder of the MacRobert Trust that today has a commitment to charitable work in assisting young people overcome disadvantages in fields such as sustainable farming and forestry. The organization also provides awards and scholarships in engineering, military training, civil aviation training, and agriculture.

Born on March 23, 1884, in Massachusetts, MacRobert was the eldest child of prominent New Englanders and avid travelers, Dr. William Hunter Workman and Fanny Bullock Workman. Fanny Bullock Workman was one of the first female professional mountaineers. She was a geographer, cartographer, explorer, travel writer, and mountaineer. At the age of 5, MacRobert’s family moved to Dresden, Germany, where she and her brother were cared for by nannies. In 1893, she attended the Cheltenham Ladies’ College in England before enrolling at the University of London, where she graduated with a second-class Honors degree in geology. During her tenure at the university, Workman spent a year studying Geology and Political Economy at the University of Edinburgh.

MacRobert completed additional research at Imperial College, as well as the Mineralogical Institute of Oslo and was the first woman to attend the Royal School of Mines. In 1910 and 1913, MacRobert attended the International Geological Congress meetings. In 1911 she published her first academic paper; “Calcite as a Primary Constituent of Igneous Rocks” in the Geological Magazine. That same year, MacRobert married Sir Alexander MacRobert, the founder of the British India Corporation. Between 1912 and 1917, MacRobert and her husband had three boys. MacRobert participated in investigative research in the Eildon Hills in Scotland, on Alnö Island in Scandinavia, and in the Kolar Gold Fields in India.

MacRobert was influential in the admission of women into the Fellowship of Geological Society of London in 1919, being one of the first women admitted into the society. That same year, she became a fellow of the Geological Society of Stockholm along with sixteen other women. From 1922 to 1937, MacRobert held the role of director of the British India Corporation and was honored the following year as a life fellow of the Royal Society of Arts. She additionally served as an Aberdeen Justice of Peace, directed the Scottish Chamber of Agriculture and was president of the British Friesian Cattle Society.

All three of MacRobert’s children died in their twenties. The eldest died in 1938 in a flying accident. The other two died in action during World War II serving with the Royal Air Force (RAF) in 1941. MacRobert first made a donation of £25,000 for the purchase a bomber for the RAF and requested it be named “MacRobert’s Reply”. In 1942, MacRobert donated another £20,000 to purchase four Hurricane fighters, which were sent to RAF operations in the Middle East. Between 1943 and 1950, MacRobert created a series of trusts to help young people in the endeavors important to her family and late husband. These trusts were combined into one trust, The MacRobert Trust, in 2001.

Rachel Workman MacRobert died on September 1, 1954, in Aberdeenshire, Scotland. The MacRobert Trust is still active today and continuously supports the Royal Air Force and other charities. It is also responsible for the creation of the MacRobert Reply Association, which assists Scottish youth organizations, and a number of awards and scholarships for military training, civil aviation, and agriculture. The MacRobert Award is viewed as the leading prize recognizing UK innovation in engineering. The key criteria are innovation, commercial success, and benefit to society.