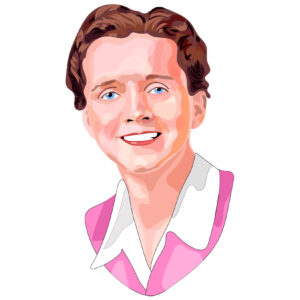 Rachel Carson was an American marine biologist, author, and conservationist. She is widely accredited with helping to create and advance the environmental movement.

Carson was born May 27, 1907, near Springdale, Pennsylvania. She was a keen reader, writer, and nature explorer from a young age, and had a fascination for the ocean. Carson originally studied English, though later switched her major to biology and graduated from the Pennsylvania College for Women in 1929. She then gained a master’s degree on the embryonic development of fish in 1932. Carson intended to study for a doctorate but instead sought teaching work to support her family during the Great Depression.

In 1936, Carson started a temporary role for the U.S. Bureau of Fisheries, writing educational materials that focused on aquatic life for weekly broadcasts. Her supervisor worked to secure her a permanent position, and in 1936 she sat the civil service exam. Carson achieved the highest score of all applicants and secured the role of a junior aquatic biologist. She was the second woman to be recruited by the Bureau of Fisheries in a full-time professional position.

Carson’s role at the Bureau of Fisheries was to monitor and report on fish populations and to write marine-based information for the public. She also wrote articles on marine life for newspapers and magazines. In 1937, The Atlantic Monthly published “Undersea,” a vivid description of life on the ocean floor. Carson’s writing career became increasingly successful in the following years; she wrote for numerous reputable magazines and newspapers, and her first book, Under the Sea Wind, was published in 1941. Carson began seeking employment as a naturalist but jobs were scarce. She stayed at the Bureau of Fisheries, later renamed the United States Fish and Wildlife Service, where she became Editor-in-Chief of Publications in 1949.

In 1952, Carson resigned from the U.S. Fish and Wildlife Service to write full-time. In the same year, she published The Sea Around Us, a prize-winning account of the ocean. The book won the 1952 National Book Award for Non-fiction, remained on the New York Times Best Seller list for 86 weeks, and has been translated into 28 languages.

In the 1950s, Carson had become increasingly familiar with the overuse of pesticides. She learned of the environmental impacts of Dichlorodiphenyltrichloroethane (DDT) and took issue with its widespread use without the appropriate safety and ecological tests. Carson was recruited by the Audubon Naturalist Society to expose the government’s practices on DDT. Her research resulted in her 1962 book, Silent Spring, which centered on the indiscriminate use of pesticides and its associated effects. The book accused the chemical industry of spreading lies, and the government of not questioning their claims. Silent Spring also discussed the environmental impacts of DDT, along with the potential health effects it caused. Carson’s claims were strongly opposed by the chemical industry, but created public outrage and resulted in numerous policy changes. DDT was banned from agricultural use in the U.S. in 1972, and in 170 other countries by 2004.

Carson’s health deteriorated in the 1960s, though she still gave interviews when possible. In 1963, she received the Cullum Geographical Medal from the American Geographic Society and an induction into the American Academy of Arts and Letters.

Rachel Carson died on April 14, 1964, at age 56. Carson donated her texts to Yale University’s Beinecke Rare Book & Manuscript Library. She received many honors posthumously. On June 9, 1980, Carson was awarded the Presidential Medal of Freedom, the highest civilian honor in the United States.