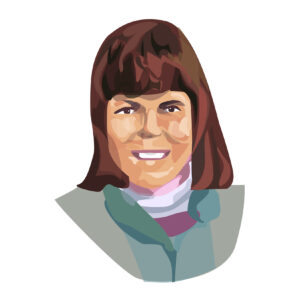 Mollie Beattie was a conservationist and the first female director of the U.S. Fish and Wildlife Services. During her career, she established many new conservation plans and oversaw the establishment of new wildlife reserves. She was also involved in conservation legislation, and was a champion of the Endangered Species Act.

Mollie Beattie was born in Glen Cove, New York on April 27, 1947. She obtained her bachelor’s degree in Philosophy from Marymount College, Tarrytown in 1968. She went on to get her master’s in Forestry in 1979 at the University of Vermont. Beattie later received a second master’s in Public Administration at Harvard in 1991.

Beattie became the commissioner of Vermont’s Forests and Parks and Recreation in 1985, and continued until 1989. She moved on to become the deputy secretary of Vermont’s Agency of Natural Resources from 1989 until 1990. In 1993, she was appointed by President Clinton and became the first female director of the U.S. Fish and Wildlife Service. She held this position until June 6, 1996, when she resigned due to her failing health.

During her time as the head of U.S. Fish and Wildlife, Beattie worked to implement over 100 wildlife conservation plans. She also was a part of creating 15 different wildlife refuges across the country. One of Beattie’s biggest achievements in conservation was her involvement in the successful reintroduction of the grey wolf to the northern Rocky Mountains.  Beattie even helped physically carry the first wolf to be introduced back into Yellowstone on January 12, 1991. Throughout her years in public services, Beattie worked to preserve biodiversity and protected endangered species by carefully managing the ecosystems in which they lived.

Beattie also became a strong political advocate for conservation. She argued that the Endangered Species Act needed to be strengthened and fought against national shortcomings in the protection of all species. She stated that, “…the economy and the environment are the same thing. If it’s unenvironmental it is uneconomical. That is a rule of nature.”

Beattie died on June 27, 1996, at the age of 49. Her life was dedicated to conservation and natural preservation. She held strong beliefs about our role in the stewardship of the natural world. Bruce Babbit, the Secretary of the Interior during Beattie’s time as head of Fish and Wildlife, said that she was “the strongest protector of America’s wild creatures and the finest steward over America’s National Wildlife Refuges.”

Beattie’s conservation efforts influenced many laws and establishments, and have caused her to be recognized even after her death. In 1996, Beattie’s life work was honored when Congress changed the name of Alaska’s Arctic National Wildlife Refuge to the Mollie Beattie Wilderness. This 8-million-acre (32,000 km2) wildlife refuge still bears her name today. In 2000, the Crystal Creek pack of Yellowstone was renamed Mollie’s Pack in honor of her work with the reintroduction of the grey wolf. In 2009, the National Women’s History Project designated Beattie as a Women’s History Month Honoree.