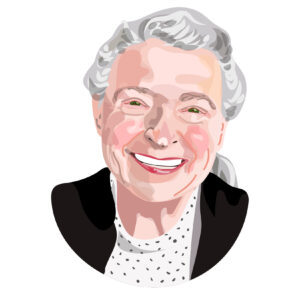 Mildred Dresselhaus, was an American nanotechnologist, solid-state physicist, and professor known as the “Queen of Carbon Science.” She is a world leader in nanotechnology, holding a 57-year career as a Professor at MIT in the departments of physics and electrical engineering. Her science and engineering research earned her presidential and leadership positions at various American physics societies as well as the National Academy of Sciences. She contributed to technical innovations in electronic technologies like smartphones.

Mildred Spiewak Dresselhaus was born November 11, 1930, in Brooklyn, New York and raised in the Bronx, New York. Her parents were Eastern European immigrants. She completed her undergraduate at Hunter College and went on to pursue advanced study at several institutions. She attended the University of Cambridge, Harvard University, Radcliffe College, and earned her PhD from the University of Chicago in 1958. She completed her post-doctoral research at Cornell University before joining the Lincoln lab at MIT in 1960.

Dresselhaus’s research interests led to further understanding of carbon materials such as graphite, fullerenes, and nanotubes. She characterized carbon nanomaterials and developed an understanding of their electron band structure, phonon behavior, and thermal transport properties. She used Raman scattering and other laser techniques to study the individual layers of carbon atoms. Furthermore, she studied how thermal energy (or heat) from vibrating particles can be captured to produce energy.

Dresselhaus’s research led to the development of innovative features in smartphones, automotive products, rechargeable batteries, and water filtration technologies. Her work also contributed to the development of space programs with carbon fibers. She demonstrated that carbon fibers are stronger and lighter weight than steel for incorporation into spacecrafts. Her research led other scientists to isolate and characterize graphene. Her studies on the electrical properties of carbon nanotubes and nanowires led to further innovation in nanotechnology for reducing the size of electrical circuits and medical devices.

In 1968, she was the first woman at MIT’s School of Engineering to gain full tenure as a professor. In 1971, Dresselhaus and a colleague organized the first Women’s Forum at MIT that explored the roles of women in science and engineering. MIT experienced a 50% increase in women attending the university throughout her time there.

Many physical theories were named after Mildred, which are taught to students throughout the world today. One is the Hicks-Dresselhaus Model, which demonstrates low-dimensional thermoelectrics for the “whole band field.” The SFDD model (Riichiro Saito, Mitsutaka Fujita, Gene Dresselhaus, and Mildred Dresselhaus) model proposes the assembly of band structures in carbon nanotubes. In 2017, General Electric created a marketing video asking the question “What if female scientists were celebrities?” to increase the number of women in STEM roles and used Dresselhaus as the face.

Mildred Dresselhaus passed away in February 20, 2017, at the age of 86. “Yesterday, we lost a giant — an exceptionally creative scientist and engineer who was also a delightful human being,” MIT President L. Rafael Reif wrote to the MIT community. Her commitments to teaching helped more women enter STEM fields as well as inspire students to develop into notable scientists like Deborah Chung, Nai-Chang Yeh, and Gregory Timp. She received numerous awards including the Presidential Medal of Freedom (from President Barack Obama, in 2014), which is the highest civilian honor in the U.S. Additionally, she was inducted into the U.S. National Inventors Hall of Fame for her patented ideas. She published over 1,700 articles and eight books.