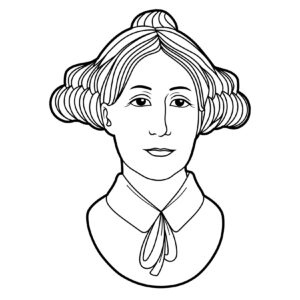 Mary Fairfax Somerville was a 19th century Scottish scientist and writer, renowned for her contributions to mathematics and physical science. Largely self-taught, she translated and wrote numerous scientific articles and popular textbooks on physics, astronomy, geography, and molecular science. A review of her first work led to the common usage of the term “scientist,” and her later work aided in the discovery of Neptune and earned her an election to the Royal Astronomical Society. Over her career, Somerville won the Silver Medal in Mathematics, a Gold Medal from the Royal Geographical Society, and has since had an arctic island, a College at Oxford, an asteroid, and lunar crater named for her.

Born on December 26, 1780 in Jedburgh, Scotland, Somerville received only a single year of formal education. Despite demonstrating a proclivity for math at age thirteen, her family did not value education for women, and instead she had to teach herself algebra and geometry from the works of Euclid and Isaac Newton. Somerville married at twenty-four, but her first husband passed away after only three years, leaving her a small inheritance. With that financial freedom she was able to pursue her interests, learning astronomy and physics, and continuing to master mathematics. In order to read the prominent works of her contemporaries, Somerville also learned French and Latin. Five years later, Somerville married for a second time. Her second husband, a naval surgeon, encouraged her studies, providing more academic books and introducing her to other scientists such as William Herschel, Charles Babbage, and Michael Faraday.

Somerville’s career began in 1825 when she carried out experiments on, and subsequently published a paper about magnetism. This paper was among the first papers written by a woman to be read by the Royal Society, and attracted the attention the British scientific community. As a result, she was asked to write a translation of Laplace’s Mecanique Céleste, with the goal of making them understandable and accessible to the general populace. This work earned her a bust in the Royal Society.

The Connection of the Physical Sciences, her second work, was published in 1834 and sold over 15,000 copies. The book, which proposed that another large planet was affecting the orbit of Uranus, contributed to the eventual discovery of Neptune. The following year Somerville, along with Caroline Herschel, became the first two women elected to the Royal Astronomical Society. The distinction also resulted in a 200-pound pension from the King of England to enable her to continue with her work. In 1848, Somerville published Physical Geography, which explored the geography, geology, and physics of the Earth and Solar System. It was used widely in schools and universities as a textbook for the next fifty years.

Molecular and Microscopic Science was Somerville’s final scientific work, published in 1869, and covered the recent discoveries and developments in chemistry and physics. Somerville spent the last few years of her life working towards women’s suffrage in Britain, and writing her autobiography, which was published in part after her death.

Mary Fairfax Somerville died on November 29, 1872, at age 91. In October 2017, the Royal Bank of Scotland issued a £10 note with Somerville’s image on it. A collection of her work and correspondence is held at the Bodleian Library and Somerville College, Oxford.