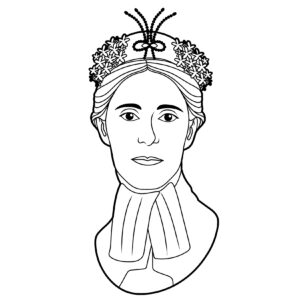 Mary Henrietta Kingsley was an ethnographer, scientific writer, and explorer born in Cambridge, England. She is known for her travels throughout West Africa and the impact that her work had on European perceptions of African cultures and British imperialism. Kingsley authored “Travels in West Africa” and “West African Studies.” She wrote: “It is merely that I have the power of bringing out in my fellow-creatures, white or black, their virtues, in a way honourable to them and fortunate for me.” Reform associations were formed in her honor that helped facilitate governmental change.

Kingsley was born in London on October 13, 1862. Her father, George Kingsley, was a doctor, traveler, and writer. Some believe that her father’s views regarding the injustices faced by Native Americans had an effect on Kingsley’s views on British cultural imperialism in West Africa. While she had little formal education, she had access to her father’s stories and vast library of science and exploration books.

In 1892, both of Kingsley’s parents died and she was left with an inheritance of £4,300. She used this money to travel to the Canary Islands and then West Africa. Kingsley started in Sierra Leone on August 17, 1893, and then traveled to Luanda, Angola. In Angola she lived with the locals and learned wilderness skills. Kingsley returned to England in December 1893.

On December 23, 1894, Kingsley returned to Africa and visited the French Congo and Gabon, to learn about cannibalism. In April 1895, she met Mary Slessor, a Scottish missionary living with the locals. Slessor informed her about the custom of twin killing, which Slessor was trying to eliminate. The custom stems from the belief that one of the twins is the offspring of the devil and since it was not possible to tell the children apart, both are killed and often, the mother is killed as well. Slessor saved many children and now this practice is universally illegal.

While traveling Kingsley financed herself through trade with the locals. She spent time with the Fang people and traveled though their uncharted territories. In Cameroon, she climbed the active volcano, Mount Cameroon and traversed the 13,250 feet (4,040 m) using a route that had never been used by a European.

She returned to England in November 1895 and lectured throughout the country about her travels. Her writings express her strong sympathies for Africans. Her two books, “Travels in West Africa,” and “West African Studies,” as well as her speeches and lobbying in England promoted a new understanding of these little understood tribes and people.

In March 1900, during the Second Boer War, Kingsley volunteered as a nurse in South Africa. She took care prisoners-of-war in the Palace Barracks in Simon’s Town, which had been converted into a makeshift hospital. Typhoid was moving through the wards and within two months, Kingsley developed typhoid and died on June 3, 1900. In accordance to her wishes, she was buried at sea. In 1903, an honorary medal was founded in her name by the Liverpool School of Tropical Medicine.