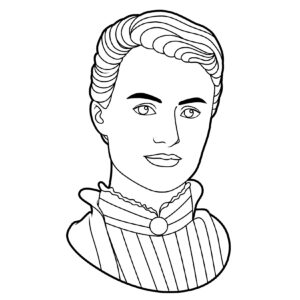 Mary Edith Durham, also known as the “Queen of the Highlanders,” is one of the most prominent British anthropologists of the twentieth century. She left a significant contribution by studying the anthropology of the people of Southeast Europe, primarily Albanians. She is the author of several books on the Balkan peoples’ customs, traditions, culture, and history.

Durham was born in London in 1863. She was the daughter of an eminent London surgeon, so she studied at the Royal Academy of Arts. Edith was a versatile woman, she loved to paint, and her watercolors were often exhibited. Edith was the author of several shows featuring photographs of amphibians and reptiles, thus contributing to the study of ecosystems. She was also a collector. On her numerous travels, she collected traditional objects of the Balkan people. Her scientific engagement is distinct, and the books she has written are still the subject of study at numerous universities throughout the Balkans. Durham had an interdisciplinary approach to the study of the people of the Balkans. It combined the people’s history, language, and customs and created a broader anthropological picture.

Her most extensive work was published in 1909 under the title “High Albania.” This book is about the customs, traditions, and history of the Albanians. In this book, Durham writes, among other things, about cultural behaviors among the Albanian people, such as “Blood Revenge.” Blood feuds are a dispute between two families. They begin with a debate, then the murder of a rival family member, and continue with the victims retaliating with the same measure.

The beginning of the twentieth century was extremely turbulent in the Balkans. The Ottoman Empire that ruled that part of Europe for centuries was falling apart. Wars and uprisings against the Ottoman rule were intense. It was during this period that Durham traveled to the Balkans. Albania was in a difficult position during World War I. Durham, asked the British public to help the Albanians. At the end of the war, Serbia-Montenegro did not hide its claims to Albania’s territorial integrity and Durham was a great critic of this policy. Because of such attitudes and commitment, Durham is still celebrated in Albania today as a person who did a lot for the Albanian people.

Edith Mary Durham is the author of several books. In her book “The Burden of the Balkans,” which was published in 1906, she talks about her experiences during her visit to the Balkans. In “The Struggle of Scutari,” Durham wrote about the relationship between Albanians, Slavs, and Ottomans. During World War I, Durham wrote the book “Twenty Years of Balkan Tangle.” which was published in 1920. Her views and efforts gained special significance with the disintegration of Yugoslavia. Edith Durham Mary died near the end of World War II, in 1944.