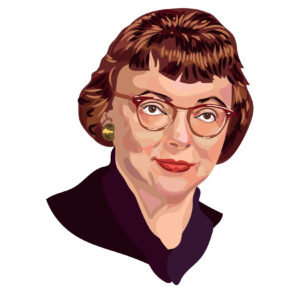 Marie Tharp was an American oceanographic cartographer and geologist. In collaboration with Bruce Heezen, she developed the first map of the Atlantic Ocean floor. Tharp’s work defined the complex geographical landscape and topography of the ocean floor. She also detailed the existence of a continued rift valley along the Mid-Atlantic Ridge. Her work helped establish the theories of plate tectonics and continental drift.

Marie Tharp was born in Ypsilanti, Michigan on July 30, 1920. Tharp’s father was a soil surveyor for the United States Department of Agriculture, and she therefore moved around the country for most of her childhood. After completing high school in Bellefontaine, Ohio, Tharp matriculated to Ohio University. She graduated in 1943 with degrees in English and Music as well as four minors.

During World War II, Tharp was recruited to a master’s program at the University of Michigan at Ann Arbor in petroleum geology. She then began her career in earth science and took a job as a junior geologist at the Standard Oil company in Tulsa Oklahoma. While working here, Tharp enrolled at the University of Tulsa and earned her second bachelor’s degree in mathematics.

In 1948, Tharp decided to advance her career and moved to New York City. She earned a position at Columbia University under Maurice Ewing who was the founder of the Lamont Geological Observatory. While there, she began to work with Bruce Heezen. Together, they used photographic data to find downed military aircraft from World War II. Tharp began to primarily work for Heezen plotting the ocean floor and continued until 1977.

Tharp collaborated with Heezen for 18 years. For most of their work together, Tharp would draw maps from bathymetric data collected by Heezen. In 1968, she joined a data collection expedition at sea. Tharp’s oceanic research included studying the ship Atlantis as well as interpreting seismographic data from undersea earthquakes. Tharp’s work with Heezen was also the first systemic effort to map the entirety of the ocean floor. Tharp’s ongoing research of undersea earthquakes proved the controversial theories of plate tectonics and continental drift. In 1977, Tharp and Heezen published their map of the entire ocean floor, entitled The World Ocean Floor, in National Geographic.

After Heezen’s death in 1977, Tharp served as a faculty member at Columbia University until 1983. She went on to operate a map-distribution business in South Nyack, New York after her retirement from Columbia University. In 1995, Tharp donated her map collection to the Library of Congress who later named her one of the top four cartographers in the 20th century. Her life’s work as a pioneering oceanographer also earned Tharp the first annual Lamont-Doherty Heritage Award.

Marie Tharp passed away from cancer at the age of 86 on August 23, 2006. In 2009, Google Earth included the Marie Tharp Historical Map giving people the ability to view Tharp’s ocean map using the interface.