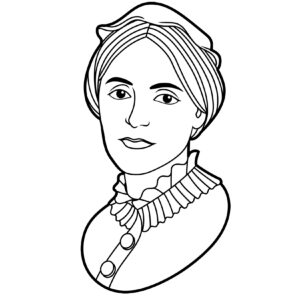 Marianne North was a biologist, botanical illustrator and the only female artist in Britain to have a permanent exhibition at Kew Gardens. In a span of 20 years, North traveled throughout various parts of the world and painted rare plant specimens. As an accomplished explorer of flora, many plant species have been named after her.

Born in 1830, North was raised in a prosperous family and had the opportunity to travel. The family often traveled to their different homes in Hastings, London, and Norfolk. Marianne’s passion for studying plants and flowers emerged from the time that she spent with her father and the British Botanist, Sir Joseph Hooker, at the Royal Botanic Gardens in Kew.

From 1847 to 1850, she traveled through Europe with her sister and father. During this time, she studied music, painting, and botany. They visited places such as Switzerland, Greece, Italy, Spain, and the Bosphorus. She kept a travel diary and recorded the events and sketched plants in her sketchbook. When Marianne’s sister married in 1864 and her father’s career as a parliamentarian ended, she and her father explored Syria, Egypt, and South Tyrol. Initially, she painted watercolor landscapes but learned oil painting the following year.

After the death of her father in 1869, North used her inheritance to continue traveling. She went to the United States, Jamaica, and Brazil and wrote in her autobiography Recollections of a Happy Life:

“I had long had the dream of going to some tropical country to paint its peculiar vegetation on the spot in natural abundant luxuriance.”

During her stay in Brazil, she created over 100 paintings while living in a small hut in the deep forest. She continued her explorations through California, Tenerife, Japan, and India and created over 200 landscapes. While in California, she observed the destruction of the redwoods and recorded it in her books. In 1878, North exhibited her 512 oil paintings at Kensington. Her work was praised for “her freedom of hand, the purity and brilliancy of color and the accurate draughtsmanship of a consummate artist.”

On her return, she requested Sir Joseph to allow her to build a gallery for her paintings in the Royal Botanic Gardens at Kew. She hired James Fergusson to implement the gallery design to house her paintings. Meanwhile, North went to Australia at Charles Darwin’s suggestion in 1880 and presented him with the shrub “Australian Sheep” on her return. The Marianne North Gallery opened for the public in 1881 with around 848 paintings. After her last painting journey to Chile, she moved to Alderley, Gloucestershire.

Marianne North died on August 30, 1890, at age 59. North gifted all her art as a contribution to the botanical world. Her paintings illustrated scientific accuracy that no one else achieved in that era. Plant species like Areca northiana, Kniphofia northiae, Crinum northianum, and the genus name Northia are named in her honor. Created in their native environment, Botanists around the world studied her botanical illustrations and expanded their knowledge of rare specimens.