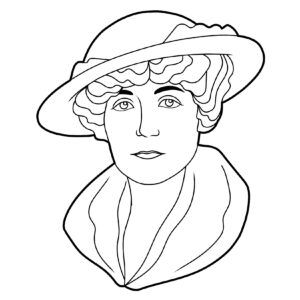 Marguerite Elton Baker Harrison was an American journalist, spy, and film maker. In 1925, she co-founded the Society of Women Geographers. The society, still running today, brought women together who were interested in geography, world exploration, anthropology, and related fields.

Marguerite Elton Baker was born in October 1879 in Baltimore, Maryland. Her father was a wealthy transatlantic shipping magnate. The family frequently traveled throughout Europe, allowing Harrison to become fluent in French and German. In 1901, she married Thomas Harrison and nine months later gave birth to their son, Thomas Harrison II.

In 1915, Harrison was 36 when her husband died from a brain tumor, leaving her and her 13-year-old son almost penniless. Her mother had also recently died, and her father’s company was in debt. She first turned her home into a boarding house, but it did not bring in enough money. Harrison was hired by the Baltimore Sun as assistant society editor with the help of an introduction from her brother-in-law. She was successful in her new role and was soon promoted to music and drama critic.

When the U.S. entered World War I in 1917, Harrison was assigned to report on women’s roles in the war effort. In 1918, at the age of 39, she applied to become a foreign intelligence officer but was turned down by the Office of Naval Intelligence. Harrison then wrote to the head of the U.S. Military Intelligence Division, Marlborough Churchill. “Employment as a special foreign agent is the only work that would justify me in giving up the work I am doing now, and I believe my qualifications and training would enable me to be of real service.” Churchill hired Harrison, and she became America’s first female foreign intelligence agent.

Harrison went to Berlin to gather information about economic and political affairs for the U.S. delegation for the Versailles peace conference. She regularly filed intelligence reports and wrote articles for the Baltimore Sun. After the Versailles treaty of June 1919, Harrison continued her espionage work in Russia.

She arrived in Moscow with Associated Press credentials. During this time, she learned Russian and held interviews with a wide variety of people. After a leak by a mole revealed her position, Harrison was imprisoned in Lubianka where she spent ten months. The American Relief Administration negotiated the release of Harrison and other prisoners in exchange for food and other aid. She recorded her experiences in two books, Marooned In Moscow (1921) and Unfinished Tales from a Russian Prison (1923).

Harrison went abroad again in 1922 to write a series of articles about the Far East. She traveled to Japan, Korea, and China before being arrested and imprisoned again while entering Siberia. She was rescued by an officer in the American Relief Administration before her trial. In March 1923, Harrison returned home for two years, during which time she devoted herself to lecturing and started writing her next book, Red Bear or Yellow Dragon (1924).

In 1924, she reconnected with Merian Cooper, whom she had met in Russia. Together with cinematographer Ernest Shoedstack, they produced the film Grass: A Nation’s Battle for Life, a documentary about the migration of the Bakhtiari tribe through Persia.

In 1925, Harrison formed the Society of Women Geographers alongside three other women, Blair Niles, Gertrude Mathews Selby, and Gertrude Emerson. Their goal was to legitimize women’s roles in journalism, geography, and science. Harrison considered this to be one of her life’s greatest accomplishments. She continued on to publish two more books, Asia Reborn (1928), which is regarded as her best work, and her autobiography, There’s Always Tomorrow (1935).

Marguerite Elton Baker Harrison died of a stroke on July 16, 1967, at age 88. Her son scattered her ashes in the Atlantic. “I thought there was an appropriate symbolism that her last remains should have gone out on the ebb tide to be swept restlessly on and on across the face of the earth by the tides of the ocean.”