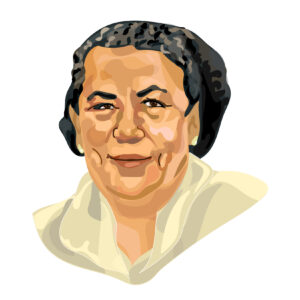 Margaret S. Collins was the first African American female entomologist in the United States. She was a child prodigy, professor, and activist. Nicknamed the “Termite Lady” due to her research on termites, she specialized in the insects of Guyana and Florida. In 1989, Collins discovered a new species of termite, the Florida damp wood termite (Neotermes luykxi), with her colleague David Nickle.

Margaret James Strickland Collins was born on September 4, 1922, in Institute, West Virginia. The daughter of Rollins James and Luella Boling James, Collins grew up in an intellectual black community that was home to West Virginia State University. Both of her parents had been college educated. Her father had his bachelor’s and master’s degrees, taught Vocational Agriculture at the university and was the county agent for the United States Department of Agriculture (USDA). Collins said of her childhood, “Because of my family and my community, my childhood was unique. I never learned what I couldn’t do – as a child, as a woman, or a Black person.”

In 1928, at age 6, Collins was recognized as a child prodigy because of her ability to read at a collegiate level. As a result, Collins skipped two grades, graduated from high school at 14, and enrolled at West Virginia State University in 1936. Collins graduated with her Bachelors in Biology with minors in Physics and German in 1943. She then enrolled in the University of Chicago’s doctorate program, earning her PhD in 1949. While at the university, Alfred E. Emerson, termite expert, was Collin’s mentor and thesis advisor. Upon completion of her thesis, “Differences in Toleration of Drying among Species of Termites (Reticulitermes),” she became the first African American woman to earn a PhD in entomology.

After receiving her PhD, Collins worked as an assistant professor at Howard University. She left the university due to slow promotion rates and joined the biology department at Florida A&M University. In 1953, she was appointed department chair. While in Florida, she met her second husband, Herbert L. Collins, with whom she had two sons. Collins also became very active in the fight for racial and gender equality. She put her science career on hold for five years while she focused on activism.

In 1961, Collins received a grant from the National Science Foundation to conduct research at the Minnesota Agricultural Experimental Station. Three years later, she returned to Howard University and accepted a tenured position at the Federal City College (now the University of DC). In 1979, Collins organized a symposium for the American Association for the Advancement of Science, “Science and the Question of Human Equality.” She retired from Howard in 1983, after accepting a senior research position at the Smithsonian Institution’s National Museum of Natural History. In 1980, Collins and her colleague Dr. David Nickle, discovered the Florida damp wood termite.

Margaret James Strickland Collins died on April 27, 1996, at the age of 73 while researching in the Cayman Islands. Nicknamed the “Termite Lady,” her career spanned fifty years and showcased more than forty research publications. A collection of her work from the 1980s can be found at the Smithsonian and in 1995, entomologists Rudolf H. Scheffrahn and Yves Roisin honored Collins by naming a new termite species after her.