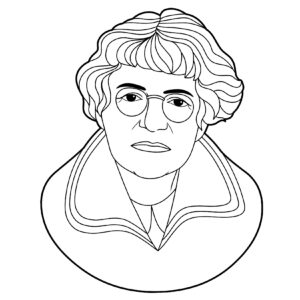 Margaret Mead was an American cultural anthropologist. Her field research, publications, and public works popularized the field as a whole and laid the groundwork for the sexual revolution of the 1960s. She advised government agencies, testified before Congress, lectured on a variety of subjects, published numerous books, and was a progressive voice in national debates on topics that ranged from sex and gender to nuclear policy, to the legalization of marijuana.

Mead was born in Philadelphia, Pennsylvania on December 16, 1901. She enrolled in DePauw University in Indiana in 1919 before transferring to the all-women’s Barnard College in New York City in 1920. After she graduated from Barnard in 1923, she entered graduate school at Columbia University. There Mead decided to become an anthropologist after she took classes with Franz Boas, often considered the “father of modern American anthropology,” and his teaching assistant, Ruth Benedict.

In August of 1925, Mead sailed to American Samoa for the first of what would become numerous anthropological field trips to the South Seas. She focused primarily on teenage girls and her work resulted in Coming of Age in Samoa: A Psychological Study of Primitive Youth for Western Civilisation, published in 1928. In January 1926, Mead took a position as assistant curator at the American Museum of Natural History, which would serve as her base of operations for the rest of her career.

On her return voyage from American Samoa Mead met Reo Fortune, a New Zealander headed to Cambridge to study psychology. In 1928, they married after Mead divorced her first husband Luther Cressman. In 1929, Mead and Fortune set out for Manus Island in New Guinea, where she studied the ways in which children’s imaginations and play were shaped by adults in the society. The research from this expedition was published as Growing Up in New Guinea in 1930, which effectively disproved the notion that infantilized so-called “primitive” peoples.

Mead and Fortune went to the Sepik region of Papua New Guinea for two years to study temperamental differences between the sexes. She described her findings in Sex and Temperament in Three Primitive Societies (1935). In the later stages of this trip, the pair encountered British anthropologist Gregory Bateson who was studying the Iatmul people. The trio worked together to hone their anthropological methodology and to develop a systematic explanation of the relationships between cultures and personality types. In 1935, Mead divorced Fortune and then married Bateson in 1936.

From 1936 to 1939 Mead and Bateson took a field trip to study the Balinese and Iatmul people to explore the role of culture in personality formation. They took approximately 35,000 photographs, 33,000 feet (10,000 m) of motion picture film, copious field notes, and over 1,200 pieces of Balinese artwork from both adults and children. Near the end of their trip the pair spent roughly six months using the methodology they had developed in Bali to study the Iatmul of the Middle Sepik region as a comparative study. Due to the onset of World War II, very little was published from Mead and Bateson’s 1938 research on the Iatmul people.

When the pair returned to the U.S. in 1939, Mead was pregnant with their daughter, Mary Catherine Bateson, who was born that December. Early in 1942, Mead went to Washington, D.C., to head the National Research Council’s Committee on Food Habits. To further assist with the war effort, she also published a book on American national character in 1942 titled And Keep Your Powder Dry.

Throughout the 1940s Mead formed organizations such as the Institute for Intercultural Studies to facilitate the flow of intercultural research. Mead also served as the curator of ethnology at the American Museum of Natural History from 1946 to 1969 and was elected a Fellow of the American Academy of Arts and Sciences in 1948. She taught at The New School and Columbia University, where she served as an adjunct professor from 1954 to 1978. She also founded the anthropology department at Fordham University and joined the faculty of the University of Rhode Island in 1970 as a Distinguished Professor of Sociology and Anthropology.

Margaret Mead died on November 15, 1978, in New York City at age 76. Throughout her lifetime Mead authored over twenty books, edited or co-authored an equal number, and contributed a multitude of publications to the field of anthropology. She served as president of the American Anthropological Association and the American Association for the Advancement of Science, and received over twenty honorary doctorates. Mead was inducted into the National Women’s Hall of Fame in 1976. She was posthumously awarded the Presidential Medal of Freedom on January 19, 1979, by President Jimmy Carter. Her work is archived in the Library of Congress.