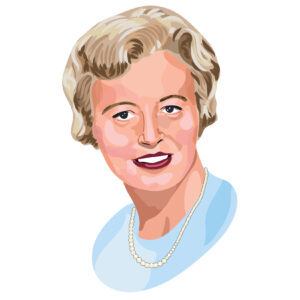 Eleanor Margaret Burbidge was a British-American astrophysicist and observational astronomer. She was one of the founders of stellar nucleosynthesis, and was first author on the B2FH paper which described the origin of chemical elements. Burbidge also studied galaxy rotation curves, quasars, and she contributed research that supported the Big Bang theory. Throughout her career, Burbidge held many leadership positions. She was also known for her activism and opposition to the discrimination against women in science and astronomy.

Burbidge started her career in astronomy during World War II where she was a caretaker at University of London Observatory. In 1945, she was turned down from a post-doctoral fellowship at Carnegie Observations because the position required her to observe at Mount Wilson observatory which was only available to men at that time. After the war, Burbidge taught astronomy to undergraduate students at the University of London Observatory.

In 1951, Burbidge took a research position in the United States at the University of Chicago’s Yerkes Observatory. Here her research focused on the different chemical elements in stars. In 1953, Burbidge and her husband returned to the United Kingdom when they were invited to work with William Alfred Fowler and Fred Hoyle at the University of Cambridge. The group studied stellar nucleosynthesis, or the theory that all chemical elements might be generated by stars by a series of nuclear reactions. Fowler was later awarded a Nobel Prize in Physics in 1983 for his work on nucleosynthesis and was surprised that Burbidge was not included in the award.

Fowler moved back to the United States in 1955, and encouraged Burbidge and her husband to join him in the U.S. Burbidge again applied for a fellowship at Mount Wilson Observatory, while her husband applied to a position at Caltech. Burbidge’s application was again denied due to her gender, so the couple switched applications. Burbidge began her job at Caltech in 1955, and her husband took the position at Mount Wilson. Burbidge often accompanied her husband on Mount Wilson, as his assistant. The observatory’s management eventually discovered she was operating the telescope and agreed to let her continue as long as the couple stayed in a private cottage away from the male dormitories.

Burbidge accepted a position at the University of California San Diego in 1962. During her time there she quantified the compositions, masses, and rotation curves of galaxies while also conducting spectroscopic studies of quasars. Her work helped support the Big Bang theory. Burbidge became the director of the Royal Greenwich Observatory in 1972, but left fifteen months later over a dispute about moving the Isaac Newton Telescope from the observatory headquarters.

Burbidge discovered that the Messier 82 galaxy contains a supermassive black hole at its center. She also assisted in developing the Faint Object Spectrograph for the Hubble Telescope. Burbidge served as the first director of the University of San Diego’s Center for Astrophysics and Space Sciences from 1979 to 1988. She was elected to a one-year term as the President of the American Association for the Advancement of Sciences in 1982. Burbidge was the first female president of the American Astronomical Society and was awarded the Henry Norris Russell Lectureship, their highest honor, in 1984. She continued researching into the 21st century and authored over 370 papers.

Margaret Burbidge passed away on April 5, 2020, in San Francisco at the age of 100. Throughout her career, Burbidge fought for equality and opposed discrimination against women in astronomy and science. When she was denied at the Mount Wilson Observatory it was a pivotal moment. “A guiding operational principle in my life was activated: If frustrated in one’s endeavor by a stone wall or any kind of blockage, one must find a way around — another route towards one’s goal. This is advice I have given to many women facing similar situations. I tell them: Try it, it works.”