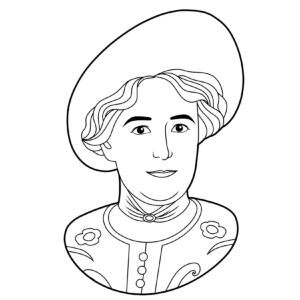 Lizzy Lind af Hageby was a Swedish-British political activist and author. Throughout her life she gave lectures in opposition to child labor and prostitution; then in support of women’s emancipation; and later animal rights and animal protection and the link with feminism. Hageby co-founded the Animal Defence and Anti-Vivisection Society and ran an animal sanctuary in Dorset, England.

Emilie Augusta Louise “Lizzy” Lind af Hageby was born on September 20, 1878, to an upper-class family in Sweden. She was drawn to philanthropic work early. In 1902, she and a friend, Leisa Schartau, enrolled in University College London so that they can learn more about the vivisection practices being taught at the time. They wrote down their observations, which were eventually published as The Shambles of Science: Extracts from the Diary of Two Students of Physiology.

The political controversy known as the Brown Dog affair, went on in England from 1903 until 1910, and arose from these writings. Hageby and Schartau said that Professor William Bayliss had been inhumane in his treatment of a brown terrier in front of about 60 students. Not only had the dog not been anesthetized properly prior to the vivisection but that it had also undergone two previous vivisections (which, under the 1876 Cruelty to Animals Act, was illegal). The professor and the students were depicted as having fun and joking during the abuse. Bayliss sued for libel. The jury found for him, and the women had to revise the chapter with this story. They included additional information about the trial itself in new versions. The publication and trial had sparked tensions and resulted in the Second Royal Commission of Vivisection in which Hageby took part.

In 1906, anti-vivisectionists commissioned a bronze statue of the dog in Battersea as a memorial with a plaque: “Men and women of England, how long shall these Things be?” This outraged some medical students who protested and then rioted to have the statue removed. The statue had to be placed under 24-hour police guard against the anti-doggers. The clash often pitted medical students against suffragists, many of whom were anti-vivisectionists or involved in animal rights. In March 1910, the Old Brown Dog statue was removed at night by four workers accompanied by 120 police officers. In 1985, a new statue of the dog was placed in Battersea Park.

Hageby also fought for better medical treatment for the poor, particularly for working women. She was alarmed by how little power women had over their treatments once they were turned over to men of science; a visible parallel to the animals that she also fought for.

In 1906, Hageby co-founded the Animal Defence and Anti-Vivisection Society. In 1913, she was involved in another libel case during which she gave a commended performance in court despite losing the overall case. Women were not permitted to be lawyers in the UK at the time, but The Nation magazine called her testimony “the most brilliant piece of advocacy that the Bar has known since the day of Russell, though it was entirely conducted by a woman.”

Lizzy Lind af Hageby continued in animal rights activism for the rest of her life. During World War I, she was a pacifist and also set up hospitals for wounded horses. Starting in 1954, she ran the Ferne Animal Sanctuary in Dorset, England. She died in 1963, leaving nearly £92,000 to the Animal Defence Trust.