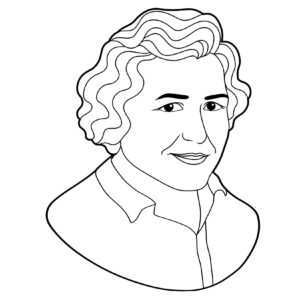 British archaeologist, Kathleen Kenyon, is known for her excavations of ancient Jericho, one of the earliest continuous settlements in the world. She contributed to the archaeological research of Britain, Africa, and the Middle East. Kenyon was the first woman member of the Oxford Archaeological Society and the first female president. In addition to her archaeological work, Kenyon served as the principal of St. Hugh’s College, Oxford and was honored as a Dame of the British Empire.

Born on January 5, 1906, in London, England to the director of the British Museum, Kathleen Mary Kenyon first studied archaeology at Oxford. Though she was the first female president of the Oxford Archaeological Society, her first archaeological job, in 1929, was as a photographer on an excavation in modern day Zimbabwe. In 1930, Kenyon joined the team of Tessa and Mortimer Wheeler upon her return to Britain and spent the next two decades honing her excavation techniques.

In 1949, British archaeologist John Garstang asked Kenyon to review his recent work in Jericho. Located in the West Bank, Jericho was the biblical city of Joshua and the Israelites. Kenyon determined that Garstang’s work needed revision and recommended additional excavations. This proved to be the turning point in Kenyon’s career and legacy.

Excavations began in Jericho in 1951 and Kenyon implemented a newer, more refined excavation technique. Dubbed the Wheeler-Kenyon Method, this practice focused on both the vertical and horizontal excavations of a site. Traditionally, soil was stripped away one layer at a time, in which the nuances of depositional time were often lost. Using this new method, Kenyon was able to excavate in a checkerboard pattern where balks of soil were left between excavation squares. This allowed for a more reliable relationship to be drawn between layers of soil and time. This resulted in more accurate dates from the Jericho excavations under Kenyon’s guidance.

Kenyon’s findings at Jericho concluded that the town had been continuously settled since 9000 BCE. The settlement started with a community of hunter-gathers and adapted to an agriculturally-based subsistence settlement. Jericho’s population in 8000 BCE is estimated to have been 2,000 to 3,000 people. Over its centuries of settlement, Jericho underwent population changes, culture shifts, and technological updates. Kenyon’s work provided much of the information we have on Jericho today, and she published several books on the subject, including Archaeology in the Holy Land and Digging up Jericho.

In 1961, Kenyon left Jericho to excavate in Jerusalem, her last excavation. In 1962, she accepted a position as the principal of St. Hugh’s College at the University of Oxford. Though she continued to excavate in Jerusalem, her main purpose shifted to growing and promoting the college. She held this position until 1973. Kenyon was recognized as a Dame of the British Empire by Queen Elizabeth II in 1973.

Kathleen Mary Kenyon died on August 24, 1978, at age 72 of a stroke. In 2003, the British School of Archaeology in Jerusalem was renamed the Kenyon Institute in her honor. Baylor University has a collection of Kenyon’s books and papers, called the Kathleen Kenyon Archaeology Collection. Kenyon’s excavation finds are held in a several collections, including the British Museum and Manchester Museum.