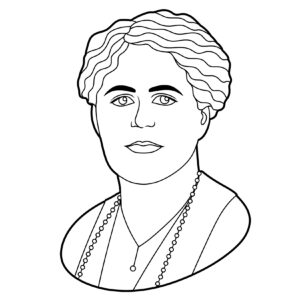 Katherine Maria Routledge was an English archaeologist and anthropologist known for exploring Polynesia. In 1913-1914, she and her husband surveyed hundreds of prehistoric sites on Rapa Nui, also known as Easter Island. They excavated over thirty moai figures, and lived among the native people, recording their oral histories and legends. In 1919, Routledge wrote The Mystery of Easter Island. Her records are preserved by the Royal Geographical Society of London.

Katherine Pease was born on August 11, 1866, in Darlington, Durham, England. She was the daughter of Kate and Gurney Pease, part of a prominent Quaker family in northern England. She attended Somerville Hall and graduated with Honors in Modern History in 1895 and afterwards taught near her home. Routledge’s first trip abroad was to South Africa to investigate the resettlement of single working women after the Second Boer War.

In 1906, she married anthropologist William Scoresby Routledge. Soon after, the couple went to live among the Kikuyu people in British East Africa, now roughly present-day Kenya. In 1910, they cowrote a book called With a Prehistoric People based on their research and time spent there.

Later that same year, the Routledges started to organize their own expedition to Rapa Nui (Easter Island). They received financial and personnel support from the Royal Geographic Society, the Royal Navy, the British Museum, and the British Association for the Advancement of Science for their voyage. The couple commissioned and outfitted a 90-foot schooner named the Mana. The Mana left from Southampton, England on February 28, 1913.

The Routledges landed on Rapa Nui on March 29, 1914. They established two camps from which they would launch their exploration: one at Mataveri, where the island’s manager lived, and one at Rano Raraku, near a stone quarry. Over the next thirteen months, Routledge and Scoresby organized excavations across the island of native moai statues, crowns, and other objects. Over thirty moai statues were dug up. In her book, The Mystery of Easter Island, she detailed the process of excavating these statues and how they were created and erected.

During her time on the island, Routledge collected oral histories and legends about the native Kanaka people. She also wrote about the native culture and lifestyle. She became friends with a middle-aged Kanaka man named Juan Tepano. He served as her guide and intermediary with the rest of the Kanaka people. Tepano helped Routledge to interview the Rapa Nui inhabitants and catalogue the excavated statues and the Ahus on which they had been erected. The Routledges left Rapa Nui in August 1915. Once they arrived back in England, Routledge wrote The Mystery of Easter Island which was published in 1919.

Towards the end of her life, Katherine Routledge increasingly suffered from paranoid schizophrenia. Her marriage with Scoresby deteriorated in 1925 when she removed him from their house. Routledge resided in a mental institution from 1929 until her death.

Katherine Routledge died on December 13, 1935, at age 69. Scoresby gave her field notes to the Royal Geographical Society. Other items from the expedition including photographs can be found at the Pitt Rivers Museum and the British Museum. Archaeologists studying Rapa Nui today still consult her field notes, her book, and her ethnographic notes about the native Rapa Nui people.