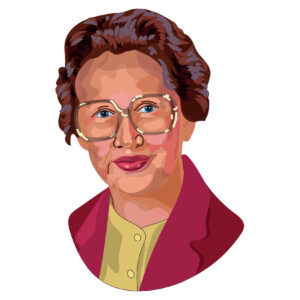 Katherine Johnson was an American mathematician whose calculations were vital to the first United States spaceflights. In her 33 years at NASA, she helped develop the use of computers to perform complex calculations that she had previously done by hand. Johnson was one of the first African-American women to work as an outer space scientist.

Johnson was born as Creola Katherine Coleman on August 26, 1918, in White Sulphur Springs, West Virginia. From early on in her life, she showed a strong interest and ability in mathematics. She could not enroll in public school past the eighth grade in her hometown as an African-American, so Johnson’s parents moved to Institute, West Virginia when she was ten. Here she attended the high school on the West Virginia State College (WVSC) campus and graduated at age 14.

Johnson then enrolled at WVSC and took every math class available. Additional math courses were added to the catalogue just for her. Johnson graduated in 1937 at age 18 with degrees in mathematics and French. After graduation, Johnson took a teaching position in Marion, Virginia. In 1939, Johnson was selected by the president of WVSC to be the first black woman to participate in the graduate program at West Virginia University, Morgantown. Here she pursued her master’s degree in mathematics.

In 1952, Johnson applied to work at the Langley Aeronautical Laboratory, the National Advisory Committee for Aeronautics (NACA) research outpost in Hampton, Virginia. She joined an all-black, all-female West Area Computing Unit, directed by mathematician Dorothy Vaughan. During World War II, NACA used female mathematicians, called “human computers,” to support the work of their engineers. Johnson worked analyzing various topics for aircraft. Within two weeks, she was transferred to the Guidance and Control Division of Langley’s Flight Research Division, which was mainly staffed by white men.

In 1958, NACA became NASA. Johnson’s skills were useful for calculating the trajectories of spacecraft and she made many contributions to the world of space travel. Johnson calculated the trajectory for Alan Shepard’s flight as the first American in space. She plotted backup charts for potential failures and checked electronic computers’ calculations. While NASA had started using electronic computers to perform these tasks, before his Friendship 7 mission, astronaut John Glenn requested that Johnson recheck the calculations by hand. “If she says they’re good, then I’m ready to go.”

In 1969, Johnson assisted with the calculations for Apollo 11’s journey to the Moon. She helped sync the Apollo 11 lunar lander with the moon-orbiting command and service module to get the astronauts back to Earth.

After retiring from NASA in 1986, Johnson spent time speaking to students, encouraging them to pursue STEM education. “There will always be science, engineering and technology. And there will always, always be mathematics. Everything is physics and math.”

Katherine Johnson died on February 24, 2020, at age 101. In addition to her work in space travel, Johnson co-authored 26 scientific papers. In 1999, she was named one of West Virginia State College’s Outstanding Alumnus of the Year. In 2015, she was awarded the prestigious Presidential Medal of Freedom by Barack Obama. The 2016 film Hidden Figures features Johnson as the main character and highlights her life and accomplishments.