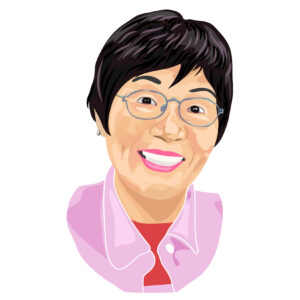 Junko Tabei was born on September 22, 1939, in Miharu, near Fukushima, Japan. Junko discovered her love for hiking at the age of ten on a school trip to a local mountain. In 1962, Tabei graduated from Showa Women’s University in Tokyo with a degree in American and English Literature. Shortly after graduating, Tabei founded a women’s mountaineering club, Joshi-Tohan Club. Their first significant climb was Annapurna III in Nepal.

The Joshi-Tohan Club decided to climb Mount Everest and applied for a permit in 1971. They waited four years to receive a place in the formal climbing schedule. The team, the Japanese Women’s Everest Expedition (JWEE), was led by Eiko Hisano and included 15 women from various professions. Tabei worked as an editor for the Journal of Japan’s Physical Society and taught piano. Significant financial resources were needed for this expedition. In order to save money, they made equipment such as gloves, pouches, sleeping bags, and pants. Tabei also raised funds from the Yomiuri Shimbun newspaper and Nippon Television, but the members still paid 1.5 million yen (U.S. $5,000) each.

In May 1975 the team used the same route that Sir Edmund Hillary and Tenzing Norgay had taken in 1953. On May 4, an avalanche struck the team’s camp at 20,700 ft (6,300 meters). Five climbers, including Tabei, were buried under the snow. There were no casualties, but Tabei lost consciousness until she was dug out by sherpas. Tabei took two days to rest and recover from her injuries. She then continued with her team up the mountain. They planned on sending two women up to the summit, however due to altitude sickness, the team’s sherpas could only carry enough oxygen for one climber. Hisano nominated Tabei to complete the climb. On May 16, 1975, twelve days after the avalanche, Junko Tabei and her sherpa guide, Ang Tsering, reached the summit of Everest. This made her the 36th person to summit Everest and the first woman.

After Mount Everest, Tabei decided to remain financially independent and refused corporate sponsorships. To continue her expeditions, she earned money as a hiking guide, made public appearances, and taught music and English. In 2002, Junko Tabei enrolled and completed her postgraduate studies. The focus of her work was the degradation and preservation of the environment on Mount Everest. In 2010, she formed an association that dealt with environmental protection, the Himalayan Adventure Fund. After the devastating earthquakes in Japan in 2001, she began organizing annual trips for children to Japan’s largest peak, Fuji.

Between 1996 and 2008, Tabei wrote seven books. Junko Tabei died in 2016 at the age of seventy-seven. She had a personal goal of climbing the highest mountain in every country in the world, and by the end of her lifetime she had completed at least 70 of these mountains. Junko Tabei’s motivation slogan was “Do not give up. Keep on your quest.”