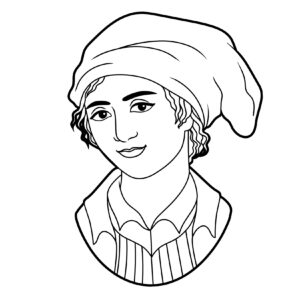 The French explorer and botanist Jeanne Baret is known as the first woman to circumnavigate the globe. She accompanied naturalist and botanist Philibert Commerson as part of the French government-sponsored worldwide expedition led by Louis Antoine de Bougainville between 1766 and 1769 before landing in Mauritius. On this trip, Baret and Commerson collected over six thousand specimens of plants and identified several new ones, including the flowering vine Bougainvillea. Some of Baret’s and Commerson’s specimens were incorporated into the French National Herbarium, and her legacy lives on in the flowering species Solanum baretiae.

Jeanne Baret was born on July 27, 1740, in La Comelle, a small village in the Burgundy region of France. She was the daughter of French laborers, Jean Baret and Jeanne Pochard. Baret’s rural upbringing acclimated her to gathering and identifying plants. Despite little to no formal education, Baret was known as an “herb woman,” someone familiar with the medicinal uses of plants.

In the early 1760s, Baret met Philibert Commerson, a prominent botanist who had moved near La Comelle. Commerson employed Baret as his housekeeper, and it is possible that Baret took over the management of his household upon his wife’s death in 1762.

In the eighteenth century there was an increase in exploration and colonization as major European powers sought to add new territories. In 1765, the French government commissioned Louis Antoine de Bougainville to lead a voyage around the world. Bougainville asked Commerson to accompany him as a botanist aboard the ship Étoile. At the time, French naval law prohibited women from being on ships. In order for Baret to join Commerson as his assistant, she posed as a man. The Étoile’s captain allowed Commerson and Baret to use his personal quarters as their accommodations, granting them privacy and keeping Baret’s gender a secret. Baret cared for Commerson throughout the journey as he suffered from an ulcerated leg and seasickness.

The Étoile embarked from Nantes on November 15, 1766. It rendezvoused with Bougainville’s other ship, the Boudeuse, in Rio de Janeiro in June 1767 after a stop in Montevideo to collect plant specimens. Commerson’s persistent ailments enabled Baret to act as the expedition’s chief botanist in collecting plants encountered along the way.

The Bougainville expedition landed in Tahiti later in 1767. Though accounts differ on the details, it was here where Baret’s identity as a woman was revealed. Baret and Commerson continued to sail with the expedition until they reached Mauritius. The pair stayed as a guest of Commerson’s friend and fellow botanist, Pierre Poivre, who acted as governor of the island. Commerson died here on March 14, 1773, at age 45.

Baret continued to live in Mauritius where she operated a tavern. She married the French officer Jean Dubernat on May 17, 1774. The couple returned to France in 1775, completing Baret’s world circumnavigation eight years after it began.

Jeanne Baret passed away at the age of 67 in Saint-Aulaye, France on August 5, 1807. She is known as the first woman to have circumnavigated the world. Many of the specimens she and Commerson collected remain in the French National Herbarium at the Muséum National d’Histoire Naturelle. In 2012, a species of nightshade was named after Baret, the Solanium baretiae.