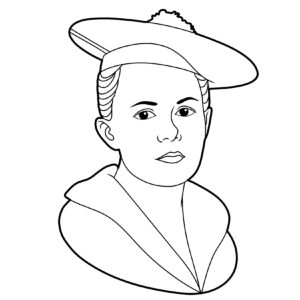 A Swiss-Russian explorer and author, Isabelle Wilhelmine Marie Eberhardt is acclaimed for her advocacy of decolonization and feminism at the turn of the 20th century. She spent the majority of her life exploring the North African Sahara and authoring fictional manuscripts set in her surroundings. Although she published her work in local newspapers, her books were published after she died in 1904. She is remembered today through 13 publications and for her unorthodox lifestyle.

Born on February 17, 1877, in Geneva, Switzerland, Isabelle spent her childhood homeschooled by her father, Alexandre Trophimowsky, an anarchist, atheist, and tutor. Fluent in French, Russian, German, and Italian Eberhardt learned Latin, Greek, and Classical Arabic. Although she studied many subjects, she was passionate about literature.

In 1894, Isabelle began her relationship with North Africa through correspondence with a French officer stationed in the Sahara, Eugene Letord. Under the pseudonym Nadia, Isabelle asked for every detail of life in North Africa, expressing her “extraordinary attraction” to the land. As Nicolas Podolinsky, Isabelle published her first works, Infernalia (1895) and Vision du Moghreb (1895) with “remarkable insight and knowledge” for someone who had never set foot in North Africa. In May 1897, Isabelle and her mother relocated to Bone, Algiers.

Outcasted by the European settlers in the region for her preternatural boldness, Eberhardt spent time with the Arabs, eventually accepting the Islamic-Sufi order, Qadiriyya. From an early age, she had taken to dressing as a man for the freedom she would not otherwise experience. Now in North Africa, she introduced herself as Si Mahmoud Saadi, an Arab or Turkish man. This identity allowed her to travel on horseback expeditions, share tents with groups of male travelers, and spend time with explorers. Convinced that she was a spy, the French administration attempted to assassinate Eberhardt, an attempt she survived. Ordered to leave Algeria soon afterward, her marriage to an Algerian soldier, Slimane Ehnni, returned her to Algeria in 1902.

As a willful writer and explorer, Eberhardt was often destitute and sickly. After her return to Algeria, she worked for the local newspaper, Al Akhbar, through which she met Hubert Lyautey, a French general, during the battle of El-Moungar. One year later, in 1904, a flash flood struck her mud house in Ain Sefra, crushing her body under supporting beams.

Isabelle Wilhelmine Marie Eberhardt died on October 21, 1904, at age 27. While searching for her in the destruction, Lyautey discovered her unpublished manuscripts. He reconstructed her work, adding to the missing or undecipherable text, and published her stories as books. After her death, 13 books were published under her real name, Isabelle Eberhardt.

Posthumously, Eberhardt received critical acclaim for her writing of North Africa. Her publications and her life have become an inspiration for various biographies, novels, films, and an Opera in 2012. Her writing is applauded as the start of the decolonization of North Africa, and her life as a discoverer is lionized as feminist. In her own words, she lived “two lives, one that is full of adventure and belongs to the desert, and one, calm and restful, devoted to thought and far from all that might interfere with it.”