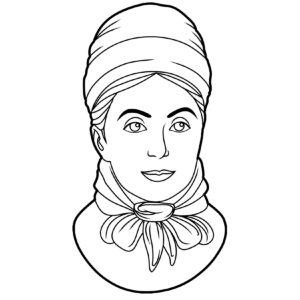 Isabella Bird was a British 19th century explorer, writer, photographer, and naturalist. She was the first woman to be awarded an Honorary Fellowship of the Royal Scottish Geographical Society and the first female member of the Royal Geographical Society. She wrote numerous publications; was awarded the Royal Order of Kapiolani by King Kalākaua of Hawaii; and was inducted into the Colorado Women’s Hall of Fame.

Bird was born in 1831 to Edward Bird and Dora Lawson in Yorkshire, England. She was educated at home by her parents. From early childhood Bird suffered from several health issues and her doctor suggested spending more time in the open air.

In 1854 Bird traveled to the United States and stayed for several months with relatives. She wrote several letters about her travel experiences to her sister, Henrietta, and other relatives. Upon her return home, she used these letters to write her first book, An Englishwoman in America.

In 1872, Bird took another trip to Australia and then Hawaii. She stayed in Hawaii for six months and climbed volcanic peaks like Mauna Kea and Mauna Loa. Her adventures in Hawaii led to her book Six Months In The Sandwich Islands, published in 1875. In Hawaii she learned how to ride a horse astride. This practice ended the backaches she suffered from sidesaddle horse riding. Bird’s book A Lady’s Life In The Rocky Mountains covers her experience in the Rocky Mountains of western America. She covered over 800 miles in freezing weather and spent time alone in a cabin.

She continued her expeditions to Japan and lived with the inhabitants of the Ainu tribe. This led her to publish another book, Unbeaten Tracks in Japan in 1880. Bird then traveled to Korea, Vietnam, Singapore and the Malay States.

After the death of her sister, Bird married Dr. John Bishop, in 1881. He however, died five years later, after-which she studied medicine and decided to travel as a missionary. In India she founded two hospitals, Henrietta Bird Hospital in Amritsar for her sister and the John Bishop Memorial Hospital in Srinagar for her husband.

Her explorations continued through to Ladakh, Kurdistan, Persia, and Turkey. On her return to Britain, she gave a committee speech about the atrocities against Armenians in Kurdistan. Soon after she journeyed to the Yangtze and Han rivers in China and Korea. Her experiences were published in The Yangtze Valley and Beyond in 1900. Bird’s last trip was to Morocco in 1901.