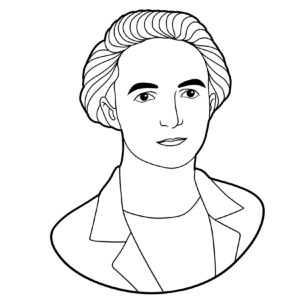 Irène Joliot-Curie was a French radiochemist, activist, and politician who was the daughter of Marie and Pierre Curie. In 1935, Irène Joliot-Curie and her husband Frédéric were awarded the Nobel Prize in Chemistry for their discovery of artificial radioactivity, also known as induced radioactivity or man-made radioactivity. Their discovery assisted in medical advances, specifically for the fight against cancer, as it allowed radioactive materials to be created inexpensively and quickly. In 1936, she was the undersecretary for Scientific Research under the Popular Front, becoming one of the first three women to be a member of a French government.

During World War I, when she was 18 years old, Joliot-Curie assisted her mother as a battlefield radiologist. She operated the x-ray machines that her mother created, known as “Little Curies.” She ran radiology units in mobile field hospitals and taught nurses to run the machines.

While working toward her doctorate, Joliot-Curie became her mother’s assistant at the Radium Institute. In 1925, she received her PhD, with a thesis on the alpha rays of polonium. While working at the Radium Institute, Joliot-Curie met Frédéric Joliot, a chemical engineer and fellow researcher that her mother asked her to train. The two married in 1926 and continued working together.

Prior to their discovery, obtaining radioactive elements was done by extracting them from natural ores, which was extremely difficult and expensive. The Joliot-Curies discovery of artificial radioactive atoms brought a wave of research into radiochemistry and especially in medicine. The radioisotopes found by the Joliet-Curies remain significant tools in biomedical research and in cancer treatments today. Their discovery resulted in the team receiving the Nobel Prize in Chemistry in 1935.

Joliot-Curie continued her work by helping to conduct research into radium nuclei, which led a separate group of physicists to discover nuclear fission. In 1946, she became director of the Radium Institute. As Joliot-Curie continued her career in science, she moved towards activism and politics. She became the undersecretary of state for science, years before women could vote. Joliot-Curie advocated for state funding of science research.  Joliot-Curie was a member of the Comité National de l’Union des Femmes Françaises and of the world’s Peace Council, and she spoke against fascism and Nazism, and in favor of women’s education. She continued in science, politics, and activism until her death.

Irène Joliot-Curie died at the age of 56 on March 17, 1956, in Paris, France of Leukemia caused by extensive radiation exposure. In 1991, the Joliot-Curie crater on Venus was named after her. Joliot-Curie’s children are both scientists; Hélène Langevin-Joliot a nuclear physicist and Pierre Joliot-Curie a biologist and researcher for the French National Centre for Scientific Research. The Royal Society of Chemistry’s annual Joliot-Curie Conference on diversity in science is named in honor of Irène and Frédéric.