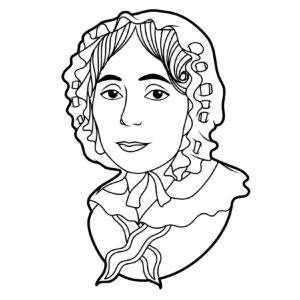 Ida Laura Pfeiffer was an Austrian explorer, travel writer, and ethnographer. She is also credited as the World’s First Solo Female Travel Writer. She traveled through Southeast Asia, the Americas, Middle East, and Africa, including two trips around the world from 1846 to 1855. She was a member of both the Berlin and Paris geographical societies and one of the first female travelers to have their journals translated into seven languages.

She was born Ida Laura Reyer in Vienna on October 14, 1797. At the age of 5, Pfeiffer took her first long trip, visiting Palestine and Egypt. Her father allowed her to receive the same education as her brothers, however, following his death in 1806, her mother tried to push her towards, what she considered more appropriate pastimes, like piano and knitting lessons.

When Pfeiffer was 22 years old, she was married, against her wishes, to Dr. Mark Anton Pfeiffer, a widowed lawyer in Lemberg, now Lviv, Ukraine. He was 24 years her senior and had a grown son. Pfeiffer had two sons, one in 1821 and one is 1824. Pfeiffer’s husband could not find work, so she taught music and drawing, but her family lived in poverty. Once both of her sons had employment, she embarked on her world travels at the age of 45.

On March 22, 1842, Pfeiffer left Vienna and traveled along the Danube River to Istanbul. She continued to Jerusalem, stopping at Gallipoli, Smyrna, Rhodes, Cyprus, Beirut, Caesarea, and Jaffa. After returning to Beirut on July 10, she sailed for Egypt, visiting Alexandria, Cairo, and the Red Sea. Pfeiffer published Reise einer Wienerin in das Heilige Land (A Vienna woman’s trip to the Holy Land) in 1844 which funded her next trip. In April 1845, she traveled to Copenhagen eventually reaching Hafnarfjörður on the southwestern coast of Iceland. Then, on horseback, she rode to Reykjavík and toured Krýsuvík. Pfeiffer also visited the Golden Falls and climbed the volcano Mount Hekla. After her return to Denmark, she took a small steamer north to Sweden and then to Norway. She returned to Vienna on October 4 and published her journal the following year entitled Reise nach dem skandinavischen Norden und der Insel Island (Trip to the Scandinavian North and the island of Iceland).

In 1846, Pfeiffer visited Brazil, Chile, and other South American countries, as well as Tahiti, China, India, Persia, Asia Minor, and Greece. On April 23, 1848, Pfeiffer traveled to Baghdad where she toured the archaeological sites of Babylon, Borsippa, and Nineveh. In August 1848, she set out for Nakhchivan bordering Armenia, then headed for Tbilisi, the capital of Georgia. She then crossed the Black Sea into the Russian Empire. Shortly after, Pfeiffer returned to Vienna and published Eine Frauenfahrt um die Welt (A Woman’s Journey Round the World) in 1850 in three volumes.

In 1851, she set off to Berlin, and then from Hamburg set sail to London. Soon after, Pfeiffer departed for South Africa on May 27, then journeyed across the Indian Ocean to the Malay Archipelago. There she spent 18 months in the Sunda Islands where she visited the Dayaks of Borneo. Pfeiffer then sailed across the Pacific to North America on July 6, 1853. She arrived on the West Coast of the United States and visited Sacramento, Marysville, Crescent City, Santa Clara, and San José before heading south to Central America. After stops at New Granada and Peru, she returned to Ecuador. On May 31, 1854, Pfeiffer boarded a steamer bound for New Orleans where she stayed for three weeks and then toured the Great Lakes Region. Pfeiffer returned to Vienna at the end of July in 1855 and completed Meine zweite Weltreise (My Second Trip Around the World), published in Vienna in 1856.

Pfeiffer’s final voyage was to Madagascar in May 1857. Her first stop was South Africa where she met a Frenchman who was involved in a plot to overthrow the Queen of Madagascar. She unwittingly became part of the conspiracy and was expelled from Madagascar after the queen discovered the attempted coup. During Pfeiffer’s passage to the coastal port of departure, she, unfortunately, contracted a disease (potentially malaria) and was unable to fully recover.

Ida Pfeiffer died on October 27, 1858, in Vienna at age 63. A travelogue describing her final voyage, Reise nach Madagaskar (Trip to Madagascar), was published in 1861 in 2 volumes and included a biography written by her son Oscar Pfeiffer. Just before her death, Pfeiffer had been elected an honorary member of the geographical societies of Berlin and Paris. In total, Pfeiffer journeyed an estimated 20,000 miles (32,000 km) by land and 150,000 miles (240,000 km) by sea.