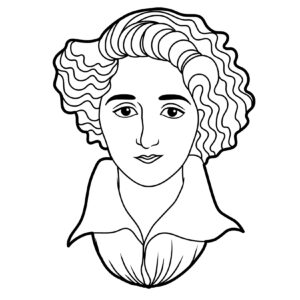 Lady Hester Lucy Stanhope, also known as Queen Hester, was an explorer, traveler, aristocrat, archeologist, humanitarian and a pioneer of Western travel to remote areas of the Middle East. She conducted the first archaeological excavation in Palestine. She was one of the first people to use a textual source to plan her excavation. She is remembered through her memoirs and letters written during her adventures.

Stanhope was the first child of Charles Stanhope, 3rd Earl Stanhope, born in England on March 12, 1776. She was well educated by her father making her a bold and assertive woman of the era. Her father was an accomplished scientist and politician. In August 1803, Hester moved to live with her uncle, William Pitt the Younger, the British prime minister, to manage his household and serve as his secretary until his death in 1806.

In 1810, after the death of her brother, Stanhope decided to leave England on a sea voyage. First landing in Gibraltar, then Greece and Turkey, and proceeding to Cairo. On their way to Cairo, they hit a storm, were shipwrecked, and washed ashore at Rhodes. During this ordeal all of their possessions were lost. Since all her clothes were gone, she started wearing local men’s clothing; Turkish pantaloons, waistcoat, turban and sword. Stanhope embraced this style for the rest of her life.

She visited Gibraltar, Malta, the Ionian Islands, Peloponnese, Athens, Lebanon, Rhodes, Egypt, Palestine, and the Syrian territory of Palmyra in 1813. So, she was the first European woman to enter the Syrian City of Palmyra (1813).

In 1815, she identified an archeological site using a medieval manuscript. This document suggested that a worthy treasure (gold coins) had been hidden under the Mosque in Ashkelon for 600 years. Given permission to excavate the site, she was accompanied by the governor of Jaffa. The excavation yielded a large statue instead of the hoped-for gold.

Lady Hester settled near Sidon, halfway between Tyre and Beirut in Lebanon. She initially resided in the Mar Elias monastery at Abra Village and later moved to the Deir Mashmousheh monastery, southwest of the Casa Jezzin. After the death of her companion, Miss Williams, in 1928 and the departure of her medical attendant, Dr. Meryon in 1931 she moved to a remote abandoned monastery known as Dahr El Sitt at Joun.

At first, she was welcomed by Emir Bashir Shihab II, but later earned his enmity. This was due to her giving sanctuary to hundreds of refugees of Druze inter-clan and inter-religious squabbles. She became the de facto ruler of the region, to the extent that when Ibrahim Pasha planned to invade Syria in 1832, he sought her impartiality.