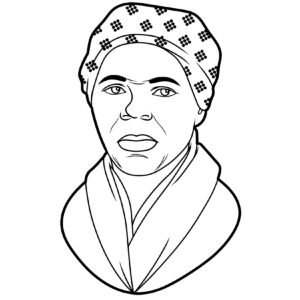 Harriet Tubman was an American abolitionist and political activist. She guided hundreds of enslaved people to freedom as a “conductor” of the Underground Railroad. Born into slavery, Tubman escaped to freedom in 1849. During the Civil War, Tubman worked as a spy for the Union Army. She served as a military leader, and was the first woman to lead an armed military expedition in the United States. In later years, Tubman fought for women’s suffrage and the rights of the formerly enslaved.

Araminta “Minty” Harriet Ross was born in Maryland 1822. Her parents, Harriet “Rit” Green (in tribute to whom Tubman would later take the name Harriet) and Benjamin Ross were both enslaved. Sensitive to injustice from a young age; at 12 Tubman attempted to stop a plantation overseer from throwing a weight at an enslaved person. The overseer’s weight hit Tubman in the head. The injury, which caused headaches and narcolepsy, plagued her for the rest of her life.

When her father was freed in 1840, it was revealed that a previous owner had set her mother as well as Harriet and her siblings free. Her mother’s new owner, however, refused to acknowledge their freedom. In 1844, Tubman entered into a marital agreement with a free man, John Tubman, and took his last name.

On September 17, 1849, when Tubman and her two brothers were about to be sold, they escaped. Although her brothers turned back, Tubman utilized the Underground Railroad to travel almost 90 miles, gaining her liberty when she reached the free-state of Pennsylvania. She took 13 to 19 subsequent journeys to assist enslaved individuals north to their freedom. Nicknamed “Moses” for her leadership skills, she was an active “conductor” from 1850 to 1860. Reports of the number of individuals she personally brought to freedom span from 70 to 300.

Tubman used different paths and methods while rescuing people. There was a network of individuals that she trusted to assist her.  She used the night sky and her knowledge of nature in addition to these reliable individuals to get north. Secret communications, disguises, and bribes were all needed for the success of her missions. The groups she led walked as well as used wagons, horses, trains, and boats to get to safety.

The passage of the 1850 Fugitive Slave Act meant that fugitive and freed individuals, if identified, could be caught and sold back into slavery. To account for this new threat, Tubman rerouted the Underground Railroad to Canada. She was a key figure among influential abolitionists of the day fighting laws like the Fugitive Slave Act. John Brown, who referred to her as “General Tubman,” conferred with Tubman while planning the Harper’s Ferry raid.

Tubman continued to fight slavery during the Civil War. She had become familiar with towns and transportation routes while “conducting” and used her expertise to aid the Union Army in their espionage and scout network. In 1863 she became the first woman in United States history to lead an armed military expedition when she led 150 men in the Combahee River Raid. The raid liberated more than 700 enslaved people.

After the war, Tubman advocated for formerly enslaved people and raised funds to assist freedmen. She joined suffragists such as Susan B. Anthony and Elizabeth Cady Stanton in the fight for women’s rights, during which she was a voice for African American women.  In 1903 she donated land for the Harriet Tubman Home for the Aged, which was opened in 1908.

Harriet Tubman passed away from pneumonia on March 10, 1913. She was buried with Military Honors at Fort Hill Cemetery in Auburn, New York. She was posthumously inducted into the National Women’s Hall of Fame (1973) and the Maryland Women’s Hall of Fame (1985). While speaking at the suffrage convention in 1896, Tubman explained, “I was the conductor of the Underground Railroad for eight years, and I can say what most conductors can’t say — I never ran my train off the track and I never lost a passenger.”