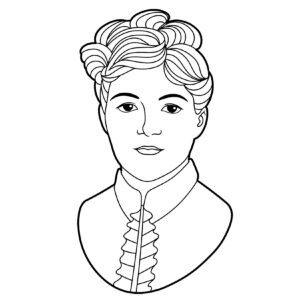 Harriet Lawrence Hemenway was one of the earliest wildlife advocates. She founded the Massachusetts Audubon Society (now known as Mass Audubon) which today protects more than 38,000 acres in Massachusetts. Mass Audubon organized fundraisers, organized conservation lectures and audited the women’s hat industry. By 1897, there were 111 local Audubon chapters in Massachusetts, 105 of them founded and led by women.

Hemenway was born in 1858 in Boston. In December 1881, she married Augustus Hemenway, a philanthropist and heir to a shipping fortune and a founding member of the Boston Metropolitan Park Commission. They lived in Back Bay, a neighborhood in Boston and had five children.

During this time, feathered hats were considered a symbol of elegance by many. In the mid-1800s, influences, such as the expanded distribution of fashion magazines, increased the demand in middle- and upper-class American women. Each year between 5 and 15 million American birds were killed and more than 60 species in the world were threatened with extinction. Woodpeckers, bluebirds, owls, herons, hummingbirds, warblers, and other species were all at risk.

In 1896, as a pioneer in the wildlife conservation movement and director of the New York Zoological Society, William Hornaday, criticized the killing of entire colonies of birds. Hemenway read the article and was inspired to make a change. With her cousin, Minna B. Hall, they held meetings to raise awareness about the use of feathers. These meetings prompted 900 women to sign up and subsequently created the Massachusetts Audubon Society. They appointed the ornithologist William Brewster as their first president.

In 1897, the women involved turned to their political contacts which spurred the passage of a Massachusetts law banning the trade of wild bird feathers. Soon, what became known as the “bird-hat” campaign of the Audubon Society in Boston spread to Congress. In 1900, the Lacey Act was passed which banned interstate commerce of protected species taken in violation of state laws. In 1903, President Theodore Roosevelt named Pelican Island the first Federal Bird Reserve. This was the start of the National Wildlife Refuge System. Roosevelt named nine additional bird reservations in Florida and a total of 55 bird reservations.

In 1913, the Weeks-McLean Law passed which prohibited spring shooting, night shooting, and interstate sale of wild game. This became the model for the Migratory Bird Treaty Act of 1918 that was first enacted in 1916 to protect migratory birds. Currently, there are over 800 species on the protection list.

Hemenway came from a family of abolitionists and revealed her convictions and values ​​by inviting the leader of the African-American community Booker T. Washington to stay at her home, when hotels in Boston refused to provide accommodation. Hemenway also participated financially in the construction of the gymnasium of Radcliffe College, the all-female institution in Cambridge, Massachusetts, equalizing the opportunities with Harvard College, which was then exclusively for men.

Harriet Lawrence Hemenway died in 1960 at the age of 101. Hemenway’s home is a stop on the Boston Women’s Heritage Trail, a series of walking tours that pass sites significant to women’s history in Boston, Massachusetts. Hemenway Street in Boston’s Fenway neighborhood was named in her honor.