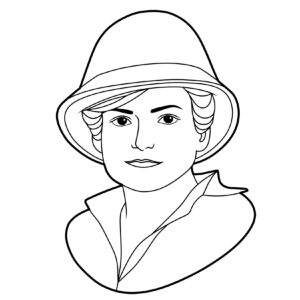 Harriet Chalmers Adams was a leading American explorer, journalist, and geographer who traveled over 100,000 miles (160,000 km) in South America. Her expertise on Latin America was valued by private industry, the government as well as academia. She lectured for over twenty years with a National Geographic series and wrote for the National Geographic Magazine. She was one of the first American women in the Royal Geographic Society. Adams was called the “Mrs. Marco Polo of the Americas,” and the “world’s greatest woman explorer.”

Adams was born on October 22, 1875, in Stockton, CA. She spent much of her childhood exploring with her father, reading, and taking private tutoring lessons. Later in life she said that the explorations with her father changed her “over from a domestic little girl fond of knitting and skipping rope to one who wished to go to the ends of the earth and to see and study the people of all lands.” Adams mastered languages such as Spanish and French, as well as Portuguese, Italian, and German.

In 1889, Adams married Franklin Pierce Adams. In the early 1900s they traveled out of the San Francisco Bay area on a steamer to South America. They visited each country in South America mainly on horseback, but also on train and by boat. During their more than 40,000 miles (6,4000 km) across Latin America she kept a journal tracking the nearly three-year long trip. In 1907, upon their return, Adams gave her first lecture at National Geographic which started her 30-year career writing more than 20 stories for National Geographic magazine.

Adams set a goal to visit every country that was or had been a Spanish colony. She followed Christopher Columbus’s trip from Europe throughout the Americas. She observed the impact of Spanish colonialism in South America which sparked her research interests. She sought to understand the social, economic, and cultural implications of colonization on the post-colonial world. She also visited Native American reservations throughout the United States to learn about the linguistic and cultural similarities/differences among tribes of North and South America. Her writing was controversial for the time as she criticized the impact of colonialism on Native Americans, like the Quechuas. Adams met with 20 indigenous tribes on the continent and according to the New York Times, she was likely the first white female to do so. Later, she expanded her anthropological findings of human migration by following Ferdinand Magellan’s sailing route from Spain to the Philippines.

During World War I, Adams was the only female war correspondent for Harper’s Magazine in Europe. The work involved visiting the trenches on the French front lines, American hospitals, and munition plants where women replaced men during fighting. She was the first female to visit and photograph battle scenes in the French trenches.

Adams was the third American woman asked to join the Royal Geographical Society in England. In 1925, she helped create the Woman Geographers Society and served as their first president. During her tenure, she recruited members from 39 countries and led the organization until she moved to France in 1933.

Harriet Chalmers Adams passed away in Nice, France on July 17, 1937, at age 61. She was buried in the Chapel of the Chimes in Oakland, CA.  “There is no reason why a woman cannot go wherever a man goes, and further,” Adams said in 1920. “If a woman be fond of travel, if she has love of the strange, the mysterious and the lost, there is nothing that will keep her at home…”