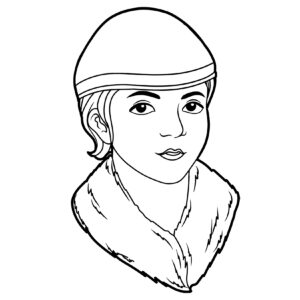 Gudrid Thorbjarnardóttir was an Icelandic explorer and has been called the most traveled woman of the Middle Ages. Thorbjarnardóttir’s history is not completely clear since what is known comes from the Vinland Sagas. These two Icelandic texts; the Saga of the Greenlanders (Grænlendinga Saga) and the Saga of Eric the Red (Eiríks Saga Rauða), were written in the early 13th century, independently of each other based on oral history and have some contradictions.

She then married Thorstein Eiriksson, Erik the Red’s son. According to the Saga of the Greenlanders, Thorbjarnardóttir and her husband voyaged to Vinland, currently around the Gulf of Saint Lawrence in North America. Their goal was to retrieve the body of her husband’s brother, Thorvald. However, her husband Thorstein died on the trip due to illness.

Her third marriage was to Thorfinn Karlsefni, a merchant in Brattahlíð, Greenland. Thorbjarnardóttir wanted to settle in Vinland and led an expedition of 60 men and 5 women. While there, she gave birth to her son, Snorri Thorfinnsson. He is thought to be the first European born in North America. The exact date is unknown, but speculated between 1005 and 1012. When Snorri was three, the family traveled back to Greenland and then to Iceland.

In Iceland, Thorbjarnardóttir converted to Christianity and made a pilgrimage to Rome. After this trip she traveled back to Iceland to become a nun and is credited with setting up several nunneries. She lived in a church built by her son Snorri.

Thorbjarnardóttir is said to have made eight successful ocean journeys; crossed Europe twice on foot; and explored and settled new lands. In 1938 a statue of Gudrid Thorbjarnardóttir was created by the sculptor Ásmundur Sveinsson for the 1939 New York World’s Fair and is on display in Glaumbær, Iceland. Replicas of this statue are on display at Laugarbrekka on the Snæfellsnes peninsula, Iceland; and in Ottawa, Canada. The statue shows her on a boat, carrying her son Snorri on her shoulder. Thorbjarnardóttir is known in her native Iceland as “Gudrid the Far Traveler.”