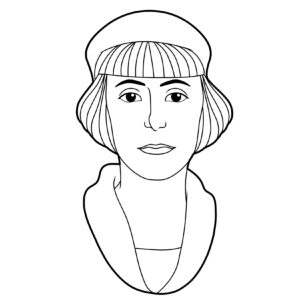 Gertrude Emerson Sen was an American writer and explorer. In 1925, she was a founding member of the Society of Woman Geographers, bringing together women interested in geography, world exploration, anthropology and related fields. Sen focused on Asia, starting in Japan, then becoming the editor of Asia magazine and then writing two books based on her experiences after moving to India: Voiceless India and Pageant of India’s History.

Sen was born on May 6, 1890. She was the daughter of Alfred Emerson Sr., an archaeologist and professor, and Alice Edwards Emerson, a concert pianist. As a young adult, she taught English in Japan for several years and became an associate editor of Asia magazine in 1917, a publication dedicated to Asian people and culture in the early 1900s.

On behalf of Asia, Sen traveled to Eastern Asia which included her first trip to India where she met with Mahatma Gandhi. In 1926, she took her second trip to, and spent a year in a small village of Pachperwa, “the village of five trees,” on the Balrampur Estate in northwestern India near Nepal. She lived among the locals and contributed to the development of the village.

In 1925, Sen founded the Society of Woman Geographers (SWG) with Marguerite Harrison, Blair Niles, and Gertrude Shelby. The Society celebrated women geographers who contributed to the collective knowledge of the countries they specialized in. For SWG’s 50th anniversary Sen wrote to the membership: “I am deeply impressed by the articles and books and published lectures noted after your names, and feel humbly proud of being associated with you. There is no place in the heavens, on earth, in the oceans or under them, that some one of you had not penetrated.”

Sen recorded her time spent in Pachperwa in Voiceless India which was published in 1930. While in India, Sen met her future husband, Indian agriculturist and scientist Basishwar (Boshi) Sen. They married on November 2, 1932, and resided in India. She published Pageant of India’s History in 1948 and a revised edition in 1964, The Story of Early Indian Civilization.

Gertrude Emerson Sen died in 1982 at age 92. Her family’s papers were donated to the New York Public Library by Edith Emerson, Ann Adams Emerson, and Martin Schneider. Gertrude Sen’s papers include correspondence, articles she wrote for Asia, and memorabilia. The SWG is still functioning today and has awarded over hundreds of fellowships to women to promote their founders’ vision to “further geographical work, to spread geographical knowledge, and to encourage geographical research.”