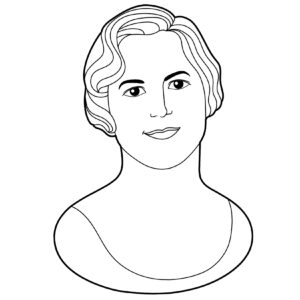 In 1926, Gertrude Ederle became the first woman to swim the English Channel at the age of 21. An Olympian and former world record-holder in five events, Ederle won three medals in the 1924 Olympics. Following her swim in the English Channel, Ederle accomplished many swimming records for short and long-distance swimming.

Born on October 23, 1905, in Manhattan New York City, Gertrude Caroline Ederle was the daughter of German immigrants, Gertrude Anne Haberstroh and Henry Ederle. She discovered a love for swimming at her family’s summer riverside cottage in Highlands, New Jersey.

Ederle began her training with the Women’s Swimming Association at the age of 13. In 1924, she was a member of the U.S. Olympic team that competed in Paris. She won a gold medal as part of the 400-meter freestyle relay team and a bronze medal for both the 100 m and 400 m individual events.

Before Ederle, only five people succeeded in crossing the channel, all of which were men. The rates of failure were high. Over the years, ten swimmers died in attempts to swim the English Channel. Ederle first attempted the swim in 1925 but became seasick after swimming for nine hours. Her second attempt was in June of 1926. Starting in France, she was coated in olive oil, lanolin, and Vaseline to protect her from the frigid water temperatures. She used motorcycle goggles to protect her eyes from salty water. The goggles were watertight. Ederle encountered horrible weather conditions during the swim across the channel. Embracing ferocious winds, huge waves, and a dangerous squall, she reached the shore of Kingstown in Dover. Her estimated time was 14 hours 31 minutes. She beat the records of men who had previously made the swim from 1875-1923.

Upon her return to Manhattan, Ederle was greeted with a parade. More than two million people cheered her on. Ederle had poor hearing since childhood due to measles and lost her hearing due to water exposure during the English Channel swim. By 1940, Ederle was almost completely deaf. She went on to teach hearing-impaired children to swim for many years at the Lexington School for the Deaf in New York. She did not know sign language but she was able to instruct swimming lessons in the water.