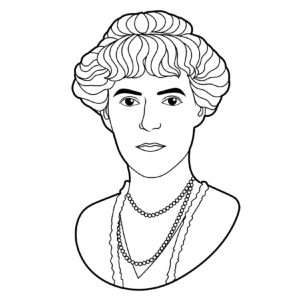 Gertrude Bell was a renowned writer, traveler, political officer, administrator, and archaeologist who became a highly influential policy maker for the British Empire due to her extensive knowledge of Syria-Palestine, Mesopotamia, Asia Minor, and Arabia throughout her travels. One of her greatest accomplishments was establishing and helping administer the modern state of Iraq with tribal leaders throughout the Middle East.

Bell was born in 1868 in England to a family with many geopolitical ties, including her grandfather Sir Isaac Lowthian Bell, an industrialist, and a Liberal Member of Parliament. His role in British policymaking exposed Bell to international matters and encouraged her curiosity in her travels and her later involvement in international politics. Bell received her early education from Queen’s College in London and then later at Lady Margaret Hall, Oxford University, at the age of 17. She specialized in modern history, and it was said that she was the first woman to graduate in Modern History at Oxford with a first-class honors degree, a feat she achieved in only two years.

After leaving Oxford in 1892, Bell travelled to Persia to visit her uncle Sir Frank Lascelles who was a British minister for the region in Tehran. She described this journey in her book, Persian Pictures, which was published in 1894. Bell would then go on to spend much of the next decade traveling around the world. This included mountaineering in Switzerland where Bell climbed La Meije and Mont Blanc, and she recorded 10 new paths or first ascents in the Bernese Alps in Switzerland. One peak, the 8,635 ft (2,632 m) Gertrudspitze, was named after her.

Bell also developed a passion for archaeology and languages. She had become fluent in Arabic, Persian, French and German, and spoke Italian and Ottoman languages. During the next 12 years, she traveled across Arabia six times writing her observations in the book Syria: The Desert and the Sown. Bell then joined an archaeology expedition where in 1907 they discovered a field of ruins in northern Syria. In 1909, Bell left for Mesopotamia, visiting the Hittite city of Carchemish, where she mapped and described the ruin of Ukhaidir, and continued to Babylon and Najaf for further work. In 1913, Bell completed her last Arabian adventure, traveling about 1,800 miles (2,900 km) from Damascus to the politically volatile Ha’il, across the Arabian Peninsula to Baghdad and then to Damascus. She was the second foreign woman to visit Ha’il.

Upon the outbreak of World War I, Bell volunteered with the Red Cross in France and later would help British Intelligence to get soldiers through the deserts. In 1916, alongside T.E. Lawrence, Bell used her extensive expertise and language skills to form alliances with the Arabs against the Ottoman Empire for the British. She was the only female political officer in the British forces and received the title of “Liaison Officer, Correspondent to Cairo.”

Throughout the early 1920s Bell was an integral part of the administration and creation of Iraq after an initial posting in 1917 as “Oriental Secretary.” Along with T. E. Lawrence, Bell helped support the Hashemite dynasties in what is today Jordan as well as in Iraq. She was described as “one of the few representatives of His Majesty’s Government remembered by the Arabs with anything resembling affection” due to her compelling work with small tribes throughout the Middle East.

Bell became an integral part of the cultural heritage in Iraq, serving as President of the Library Committee of the now named National Library of Iraq, from 1921 to 1924. Bell also formed the Baghdad Archaeological Museum, later renamed the Iraqi Museum, to preserve Iraqi culture and history.

Gertrude Bell died July 12, 1926, at the age of 57. After her death Bell was given several posthumous tributes such as Commander of the Order of the British Empire, as well as having a new genus of bee named after her when discovered in 2019. Further works and exhibitions of her discoveries and travels can be found in The Gertrude Bell archive, held by Newcastle University, which was added to the UNESCO Memory of the World Programme in 2017.