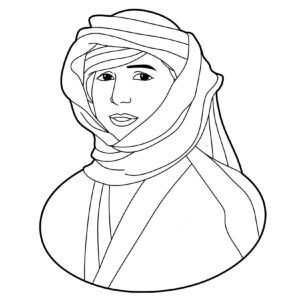 Freya Stark was a British explorer and travel writer. During her 100-year life, she traveled to repressed regions and wrote about her experiences. She was one of the first Westerners to visit the Elburz Mountains in Iran and from the experience she wrote The Valleys of the Assassins. Stark served as a nurse in World War I and an activist in World War II. She received the Royal Geographical Society’s Back Award in 1933, the Mungo Park Medal in 1935, the Founder’s Gold Medal in 1942, and was knighted in 1972.

Dame Freya Madeline Stark was born on January 31, 1893, in Paris, but spent most of her childhood in Asolo in northern Italy. She was often confined to her home due to illness and took an interest in reading. Stark received no formal education as a child but enjoyed reading French and taught herself Latin. In 1912, she enrolled at Bedford College in London to study history.

At the start of World War I, she left school to work as a nurse in Bologna. She then moved to London and worked as a censor of international correspondence. Stark then trained with the Voluntary Aid Detachment (VAD) and worked in Italy from 1917 until the war ended. At thirty, Stark enrolled at Bedford College and the School of Oriental and African Studies (SOAS) to study languages and focused on Arabic and Persian.

In 1927, Stark took her first trip to the East and traveled to Beirut, Lebanon. Much of her journey was in secret, on a donkey, with a Druze guide and an Englishwoman. Travel was not allowed in the region due to the Mandate for Syria and Lebanon. Even though they traveled at night and in remote areas, they were caught by French Army officers. The officers thought the women were spies, but then released them after three days. Following the journey, in 1928, Stark published her first magazine article and wrote about the abuse experienced by the Syrian people by the French regime.

In 1934, Stark set out for the ancient city of Shabwa. Sailing down the Red Sea, she hoped to trace the frankincense route of the Hadhramaut. While she did explore the region more widely than any other Westerner, she fell ill and had to cut her trip short. She still was able to publish three books, The Southern Gates of Arabia: A Journey in the Hadhramut (1936), Seen in The Hadhramaut (1938), and A Winter in Arabia (1940). In 1942, Stark received the Royal Geographical Society’s Founder’s Gold Medal.

During World War II, Stark joined the Ministry of Information and helped create Ikhwan al Hurriya which was a propaganda network trying to get Arabs to support the Allies or remain neutral. Stark described her experiences in Letters from Syria, and East is West.

Stark’s first post war travels were to Turkey which she wrote about in Ionia a Quest, The Lycian Shore, Alexander’s Path, and Riding to the Tigris. In 1968, at age 75, Stark made her last expedition to Afghanistan. She visited the Minaret of Jam and wrote The Minaret of Djam: An Excursion into Afghanistan.

Stark retired in Asolo, Italy where she worked on a short survey, Turkey: A Sketch of Turkish History, and a new volume of essays: A Peak in Darien, Letters, and The Journey’s Echo. Stark was knighted in 1972 and became known as Dame Freya Stark.

Dame Freya Madeline Stark died at the age of 100 on May 9, 1993, in Asolo. Stark authored over two dozen books on her travels throughout the Middle East and Afghanistan as well as numerous autobiographical works and essays.