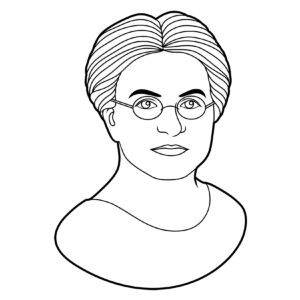 Florence Rena Sabin was an American pioneer in the medical field and the creator of the Sabin Health Laws reforming public health in Colorado. She was the first female full professor at Johns Hopkins School of Medicine and the first woman elected to the National Academy of Sciences. Sabin was also the first woman to head a department at the Rockefeller Institute for Medical Research and the first female president American Association of Anatomists.

Sabin was born on November 9, 1871, in Central City, Colorado. She was the second child of Serena and George Sabin. Sabin’s mother died in 1878, forcing her and her sister Mary to move to Chicago with a relative. Later, the girls relocated to Vermont with their paternal grandparents.

Sabin earned a bachelor’s degree from Smith College in 1893, planning to study medicine at Johns Hopkins University. Her family couldn’t afford tuition, leading Sabin to teach mathematics in Denver for two years, and zoology at Smith. Sabin entered Johns Hopkins Medical School in 1896 as one of fourteen women in her class. Sabin caught the attention of anatomist Franklin P. Mall. Professor Mall focused Sabin to produce a newborn’s brain stem model, resulting in writing, On the Anatomical relations of the Nuclei of Reception of the Cochlear and Vestibular Nerves (1901), her first work.

After graduation, Sabin won an internship to study under William Osler, physician and medical historian. Sabin found that she did not have time to do research. Completing the internship, Sabin returned to Johns Hopkins and worked with Franklin Mall. Sabin was a talented researcher, but Johns Hopkins was hesitant to hire a female professor. Sabin relied on the financial support from a group supporting female researchers. Sabin continued her work and was hired at Johns Hopkins in 1902 as an assistant professor, later promoted to associate professor in 1903.

Professor Mall died in 1917, and Sabin hoped to become department chair. She was passed over in favor of one of her male students. While some of her students did protest, Sabin was promoted to a full professor position instead, making her the first female at that rank. Sabin’s interest turned to the origins of blood, blood vessels, blood cells, the brain’s histology, and the pathology and immunology of tuberculous. She remained in this role for seven years.

In 1925, Sabin moved to the Rockefeller Institute to head the cellular immunology section, making her the first female at the institute. In 1924, she became the first woman president of the American Association of Anatomists and in 1926 she became the first woman to gain membership in the National Academy of Sciences. At the Rockefeller Institute, Sabin became interested in the role of white blood cells in tuberculosis.

In 1926, Sabin joined the National Tuberculosis Association. The association’s purpose was to consolidate research and find a cure. While there, Sabin researched immune cells and monocytes. She spent her final years determining the effects of foreign substances and antibodies.

In 1938, at the age of 67, Sabin left her position and retired to Colorado. While in retirement, Sabin remained active in the scientific community. In 1944, the Colorado governor appointed her to oversee postwar public health problems. Eventually, through her efforts, the Sabin Health Laws came into existence. Sabin held that position until 1953.

Florence Rena Sabin died on October 3, 1953, at age 81. The Florence R. Sabin Collection at the Johns Hopkins Medical Institutes Archives spans her career and consists of correspondence, papers, and medical records. The Sophia Smith Collection of Women’s History at Smith College as well as other institutions hold Sabin’s papers as well. In 1959, Colorado donated a statue of Sabin to the National Statuary Hall Collection. In 1973, Sabin was inducted into the National Women’s Hall of Fame. In 2005, the Johns Hopkins School of Medicine named one of their four colleges after her, Sabin College.