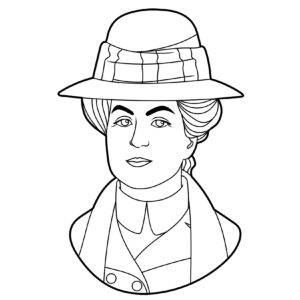 Fanny Bullock Workman was one of the first female professional mountaineers. She was a geographer, cartographer, explorer, travel writer, and mountaineer who earned medals of honor from 10 European geographical societies. She was a member of the Royal Asiatic Society, Club Alpino Italiano, Deutscher und Österreichischer Alpenverein, Club Alpin Francais, and a founder of the American Alpine Club. She wrote eight books with her husband and set many women’s altitude records.

Fanny Bullock Workman was born on January 8, 1859, to a wealthy family in Worcester, Massachusetts. Workman’s early education was from governesses and she later attended Miss Graham’s Finishing School in New York City. On June 16, 1882, Workman married William Hunter Workman, who was also from a wealthy family. The couple had two children. Rachel was born in 1884 and Siegfried was born in 1889, but died of influenza and pneumonia in 1893.

In 1889, Workman and her husband moved to Germany. The couple took cycling tours and authored eight books. Workman penned most of the travel books and focused on the plight of women in those areas. Between 1888 and 1893, the couple completed bicycling tours of Italy, France and Switzerland. During this time, Workman became one of the first women to climb Mont Blanc, the Jungfrau, and the Matterhorn. Workman decided to take a longer trip and in 1895 they biked 2,800 miles (4,500 km) across Spain. After this trip, they wrote Sketches Awheel in Modern Iberia.

Starting in November 1897, the Workmans covered 14,000 miles (22,500 km) in India. When they reached the Himalayas, they hiked over the mountain passes that were between 14,000 and 18,000 ft (4,200 and 5,500 m). After their first experience in the Himalayas, they became captivated with climbing and traveled 8 more times to the area. Since it was unexplored and unmapped at the time, the Workman’s created maps, surveyed and photographed the area.

In 1899, they began exploring the Biafo Glacier in the Karakoram but switched to the Skoro La Glacier due to poor weather and dangerous crevasses. They reached a peak at 18,600 ft (5,700 m), where Workman set an altitude record for women and named it Siegfriedhorn after her son. After camping at 17,000 ft (5,200 m), they climbed a 19,450 ft (5,930 m) peak and coined it Mount Bullock Workman. From their vantage point, they could see K2, the second-highest mountain in the world. Workman is credited with possibly being the first woman recorded to have laid eyes on it.

In 1902, the Workmans were the first westerners to explore the Chogo Lungma Glacier. In 1903, they explored the Hoh Lumba Glacier. Workman set another altitude record by ascending a 22,567 ft (6,878 m) peak on Pyramid Peak, later renamed Spantik. In 1906, at age 47, Workman climbed 22,735 ft (6,930 m) on Pinnacle Peak setting an altitude record for women that stood until 1934 when it was surpassed by Hetti Dhyrenfurth.

In 1908, the Workmans traveled to the Karakoram and explored Hispar Glacier in the Hunza Nagar region. They trekked from Gilgit to Nagir over the Hispar Pass onto the Biafo Glacier to Askole. This earned Workman another record as the first woman to travel across a Himalayan glacier of that size. In 1911 and 1912, the Workmans began to explore the Rose Glacier and the Siachen Glacier in Baltistan around Masherbrum. It was the widest and longest subpolar glacier and the least explored and accessible glacier in the world at that time. They spent two months at over 15,000 ft (4,600 m), exploring and mapping the area. They summited and named the highest point Indira Col. Workman led them across the Sia La pass and through the Kaberi Glacier previously unexplored. She wrote Two Summers in the Ice-Wilds of Eastern Karakoram about the expedition.

Around 1914, Fanny and William stopped traveling and began writing and lecturing. Workman was one of the first women admitted to the Royal Geographical Society. In 1917 she became ill and died in 1925 in Cannes, France. She left $125,000 to Radcliffe, Wellesley, Smith, and Bryn Mawr colleges. Wellesley College offers a $16,000 fellowship named after Fanny. Bryn Mawr has a Fanny Bullock Workman Traveling Fellowship.