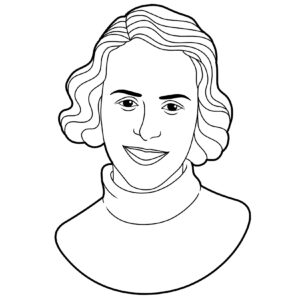 Eva Dickson, who only lived for 33 years, was an explorer, war correspondent, travel writer, the first Swedish female rally driver, and the third Swedish female aviator. Dickson was the first woman to cross the Sahara Desert by car.

Dickson was born on March 8, 1905, in Sigtuna Sweden as Eva Lindström. Dickson’s father, Albert Lindström, was a wealthy horse breeder. Dickson was educated at home until 1916 when her family moved to Stockholm where she attended school.

At 20 she married a rally driver, Olof Dickson. The couple traveled throughout Europe by car and motorcycle. Olof taught her about rally driving and in 1927, Eva entered her first major rally event. Dickson began competing in major races. In order to bypass the rules for male-only events she registered under the pseudonym Anton Johansson. She often finished in the top of races. After 7 years of marriage, in 1932, they divorced due to his lack of support of her increasing interest in travel. She soon met Baron Bror von Blixen-Finecke, whom she would later marry.

That same year, Dickson and a friend drove from Nairobi to Stockholm on a bet. The 27-day journey caught media attention. She used the fame and starting in 1933 she wrote a series of travel guides.

In 1934, Dickson went back to Kenya and took part in scientific expeditions. In 1935 she traveled to Ethiopia with Blixen-Finecke. The Weekly Journal, a Swedish newspaper, sent her to report on the Abyssinia Crisis. They returned to Kenya on mules by traveling 1,243 miles (2,000 km).

In 1936, Dickson and Blixen-Finecke got married in New York City. For their honeymoon they sailed around the Caribbean with their friends Martha Gellhorn and Ernest Hemingway. They went to Cuba and the Bahamas and ended in Key West Florida at Hemingway’s home.

Dickson wanted to become the first person to drive the Silk Road. On June 3, 1937, she started in Stockholm with the goal of ending in Beijing. She drove through Germany, Poland, Romania, Turkey, Syria and Iran. When she reached Afghanistan, she was advised to change her route and detour through India as the upcoming journey was dangerous. When she reached Calcutta, India she became ill and was hospitalized. She was treated with arsenic and her conditioned worsened. While in the hospital, she learned that the Second Sino-Japanese war had broken out. Since she would not be able to travel to Beijing she decided to drive back to Europe.

In 1938, after traveling for 9 months she traveled from India to Baghdad to see friends. In March of 1938, while driving back to her hotel from dinner, she drove off the road and this tragic car accident is where she died at age 33. She was buried in Stockholm, Sweden on April 22, 1938.