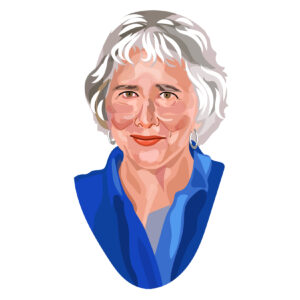 From her graduation in 1942 to her last dive in 2014, Eugenie Clark conducted over 70 submersible dives and became known as “The Shark Lady.” In a career that spanned 60 years, Clark devoted her life to conservation of marine life focusing on sharks and their behavior and intelligence. She became the first person to train sharks and is credited as being the first scientist to develop “test tube” babies in fish. She is still a widely respected ichthyologist.

Eugenie Clark was born to Charles Clark and Yumico Motomi in New York City on May 4, 1922. Clark received a Bachelor of Arts in Zoology from Hunter College in 1942. She went on to earn a Master of Arts in 1946 and a Doctorate of Zoology in 1950 both from New York University. While earning these degrees, she also studied at the University of Michigan Biological Station and worked as a chemist for Celanese Corporation. While going to graduate school, she conducted research at the Scripps Institution of Oceanography, the American Museum of Natural History, the Woods Hole Marine Biological Laboratory, and the Lerner Marine Laboratory.

In 1949, Clark conducted studies of the fish populations in Guam, the Marshall Islands, the Palau Islands, the Northern Mariana Islands, and the Caroline Islands. She went on to ichthyologic studies where her work at the Marine Biological Station in Hurghada is chronicled in her first book, Lady with a Spear.

Clark founded the Cape Haze Marine Laboratory in Placida, Florida. Now known as Mote Marine Laboratory, it is based on City Island in Sarasota, Florida and has additional campuses in eastern Sarasota County, Boca Grande, and the Florida Keys. She began work with assistance from a local fisherman named Beryl Chadwick. Clark conducted a number of experiments on sharks and other fish. While diving local waters, she was able to study various organisms by using the glass jar catching technique which enabled her to take specimens with her for further research.

Clark was a supporter of dispelling assumptions about shark’s behavior and intelligence in an attempt to prevent killing and promote preservation of marine environments. Clark discovered the Moses Sole secretes a natural shark repellent containing pardaxin which has launched research aimed at preventing harmful shark and human interactions. Clark’s study of “sleeping sharks” during a study in Mexico proved some sharks do not have to be moving to breathe. Clark also trained sharks in a pool to press a target for a reward of food.

In 2000, Clark returned to Mote Marine Laboratory, a nonprofit, marine research organization. She worked as a Senior Scientist, Director Emerita, and Trustee. She remained active as a researcher and diver there until her death in 2015 at the age of 92.

Clark authored Lady with a Spear and The Lady and the Sharks, she co-authored Desert Beneath the Sea and published more than 175 scientific articles. She completed more than 200 field research expeditions, worked on 24 television specials and had a hand in creating the first IMAX film. Genie’s dogfish, also known as Squalus clarkae, along with several other species of fish have been named in honor of Eugenie Clark.