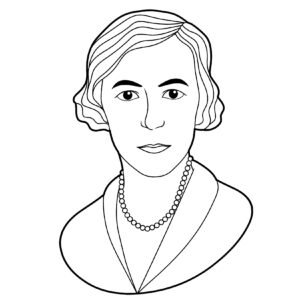 In 1928, the British explorer Enid Gordon-Gallien became the first person to map the previously uncharted Kalambo Falls in Zambia and Tanzania, one of the tallest interrupted waterfalls in Southern Africa. Her efforts alongside a team of surveyors and geologists would put Kalambo Falls at the forefront of archaeological expeditions. Kalambo has been an important archaeological site in Africa throughout the 20th century, and is still an important cultural heritage site today.

Gordon-Gallien, born in Melbourne, Australia in 1885, was an avid explorer who was deeply involved in geographical surveying and mapping throughout her career. During her early life, Gordon-Gallien was heavily involved in World War I, supporting the efforts in both France and Egypt. Following her time abroad throughout the conflict, she travelled the world on many adventures with her husband, including driving a car to Baghdad from Britain to immerse herself in the culture of the Middle East; as well as becoming shipwrecked on the Great Barrier Reef while journeying to Borneo. This minor misadventure would not deter her however from following her passions in life and becoming a member of the Royal Geographical Society in 1925.

In 1928 Gordon-Gallien studied field astronomy and surveying which would eventually lead to her important discoveries in Southern Africa. After investigating what new expeditions could be run that year, Gordon-Gallien was approached by the president of the Royal Geographical Society, Colonel Sir Charles Close, who proposed to chart the only recently discovered Kalambo Falls. Gordon-Gallien began her work in haste at Dar-es-Salaam on June 15th of the same year. Alongside her research partners J. W. Cornwall, a surveyor, and Colin Rose, a geologist, Gordon-Gallien successfully mapped the entirety of the falls as well as providing a more accurate measurement of the size and depth of the area as a basis for future scientific work in the region.

The findings of the expedition were presented in 1929, and as a result of her work on the expedition, Gordon-Gallien was awarded the Back Award in 1930: an award given for “applied or scientific geographical studies which make an outstanding contribution to the development of national or international public policy.” Gordon-Gallien received her aviator certificate in August 1930 allowing her to explore the skies as well.

Enid Gordon-Gallien died as a passenger in a plane crash on June 18, 1931. Gordon-Gallien’s expedition to survey the Kalambo Falls, which were previously unknown to the wider world, led to further discoveries. The Kalambo Falls archaeological dig sites unearthed evidence of continuous habitation since the Late Early Stone Age. The area was first excavated in 1953 (and later in 1956, 1959, and 1963), with human activity spanning over 250,000 years being discovered. As a result of Gordon-Galliens work and the further expeditions into the area, the archaeological site was noted as a national monument by Zambia’s National Heritage Conservation Commission in 1964 and has since been protected. Furthermore, Kalambo Falls was included on the UNESCO list of tentative World Heritage Sites in 2009 where it remains to this day.