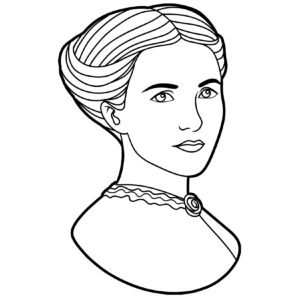 Elizabeth Garrett Anderson cofounded the London School of Medicine for Women, the first medical school in Britain to train female doctors. Anderson was the first woman to qualify in Britain as a physician and surgeon. She was active in the women’s suffrage movement and was the first female mayor in England. In 1866, she founded St Mary’s Dispensary to allow poor women to receive treatment from qualified female doctors. This legacy is continued today in the Elizabeth Garrett Anderson wing of University College Hospital.

Anderson was born on June 9, 1836, in Whitechapel, London, and grew up in Aldeburgh. Up until the age of 13, she was taught by her mother, and then by her governess. At the age of 13, Anderson was sent to a boarding school in Blackheath, London. After graduating, Anderson took a 9-year break before continuing her education.

After meeting Elizabeth Blackwell, the first woman to receive a medical degree in the United States, Anderson decided to enter the medical field. In August 1860, Anderson spent six months as a surgery nurse at Middlesex Hospital in London. Her attempts to enroll in the hospital’s Medical School were unsuccessful, but she hired private tutors, and was eventually allowed into some lectures. However, her male classmates objected to her presence, and she was thrown out. Anderson applied to several other medical schools, who also refused her admittance. Anderson continued to study privately, and in 1865, she took and passed her exam. Anderson obtained a license (LSA) from the Society of Apothecaries to practice medicine, and was the first woman in Britain to do so openly. The Society later changed their rules to prevent other women from becoming certified until the introduction of the new Medical Act in 1876, which allowed British medical authorities to license all qualified applicants regardless of gender.

In 1866, Anderson established a dispensary for women in London, St. Mary’s Dispensary. It employed female doctors and gave poor women the opportunity to be treated by a same sex physician. The dispensary grew into a hospital by 1872, and was renamed the New Hospital for Women and Children. The hospital had an entirely female staff, and treated the gynecological issues of women in London.

Anderson was officially appointed to a medical post in 1870 as a visiting physician of the East London Hospital for Children, making her the first woman in Britain to hold a medical position. Three years later, she became the first female member of the British Medical Association. In 1874, Anderson cofounded the London School of Medicine for Women, the first medical school in Britain to train women as doctors.

Anderson’s efforts were not limited to the medical field. She was a prominent figure in the fight for women’s suffrage, as was her daughter, Louisa. In 1908, after her retirement, Anderson was elected mayor of the town of Aldeburgh, making her the first female mayor in England.