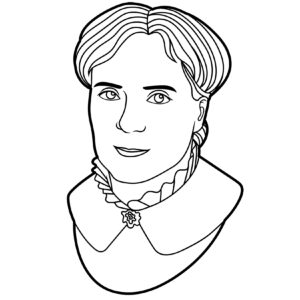 Blackwell was born near Bristol, England on February 3, 1821. She spent her childhood under the tutelage of private educators and a governess. She worked as a school teacher until privately undertaking the study of medicine with undisclosed physicians. Elizabeth applied for admission to leading medical institutions, all of which rejected her. However, in 1847, after receiving a unanimous vote by the male-only student body, Blackwell enrolled at Geneva Medical College in New York. In 1849, she was first in her class and became the first woman to graduate with a medical degree in the United States. Blackwell traveled back to Europe to further her medical studies and again was rejected by many schools. Eventually, she enrolled at La Maternité in Paris by agreeing to be treated as a student midwife instead of a physician.

In 1851, Blackwell returned to the U.S., where she had a few patients and gave lectures. In 1852, Blackwell opened a dispensary for poor women and children that, in 1857, with her sister, Dr. Emily Blackwell, and Dr. Marie Zakrzewska, expanded into the New York City Infirmary for Indigent Women and Children.

The Blackwell sisters created the Women’s Central Relief Association (WCRA), organizing thousands of women to distribute life-saving supplies, during the American Civil War. Blackwell also started the first formal training for female nurses in the country by offering a one-month training course for 100 women who wanted to be nurses for the army.

In 1869, Blackwell returned to the UK. In 1871, she co-organized the National Health Society. In 1874, Blackwell, along with Florence Nightingale, Sophia Jex-Blake, Elizabeth Garrett Anderson, Emily Blackwell, and Thomas Henry Huxley, established the London School of Medicine for Women, the first medical school for women in England. At this school, Blackwell acted as the chair of hygiene.

Blackwell established institutions dedicated to training female students; campaigned for women’s rights; and was a pioneer in advancing education for women. She published her autobiography, Pioneer Work in Opening the Medical Profession to Women, in 1895. Elizabeth Blackwell lectured at the School of Medicine for Women and worked at her practice in Hastings, England, until her passing.