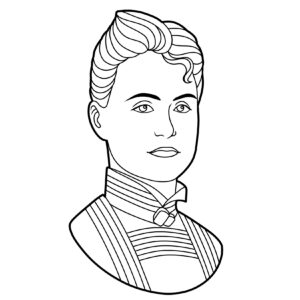 Eliza Ruhamah Scidmore was an explorer, geographer, journalist, travel writer, photographer, and advocate. She was the first female board member of the National Geographic Society and is well-known as the person responsible for planting Japanese cherry trees in Washington, D.C.

Eliza Ruhamah Scidmore was born on October 14, 1856, in Madison, Wisconsin. She grew up in her mother’s boarding house where she met travelers and politicians, and witnessed Civil War troops passing by. Scidmore attended Oberlin College in Ohio and then moved to Washington, D.C. She built friendships with influential members of Washington society during events and was a journalist for various newspapers. She worked as one of the female correspondents who reported on the Gilded Age society in Washington and was referred to by the press as one of the “lady writers.”

While on a sight-seeing trip to Alaska, Scidmore and her fellow steamship passengers became some of the first tourists to visit Glacier Bay. She did the trip again a year later and created the first guidebook on Alaska using her newspaper dispatches. In the travel guide, she described meeting Tlingit families hunting in Glacier Bay, interacting with one of the first white settlers of the area, and getting to the face of a tidewater glacier. Her publications helped influence the opening of Alaska to western tourism.

Eliza traveled to Japan many times between 1885 and 1928 to visit her brother, who was a U.S. consular official there. Upon returning, she had the idea to plant Japanese cherry trees in D.C., which First Lady Helen Taft eventually picked up. The trees are now an iconic part of Potomac Park every spring. Scidmore learned about Mukojima, a mile-long display of cherry trees on the Sumida River, and wanted to create a Mukojima on the Potomac. Japan offered to donate 3,000 trees as a gesture of friendship to the United States.

She joined the National Geographic Society in 1890, which later elected her as corresponding secretary. This made her the first woman on the Society’s board and she contributed as a writer, editor, photographer, and lecturer. She reported from across the Far East, published travel books on Japan, Java, China, and India, and wrote a novel on Japan’s treatment of Russian prisoners during the Russo-Japanese War. Her July 1914 article “Young Japan” was likely the first time a woman had photographs in National Geographic.

She spent her later years in Geneva, Switzerland following developments at the League of Nations. Scidmore died on November 3, 1928, at age 72 after an emergency appendectomy. Her ashes are buried in a Yokohama cemetery in Japan next to her mother and brother’s ashes. Scidmore Glacier in Glacier Bay is nestled on the side of the Fairweather Mountains.