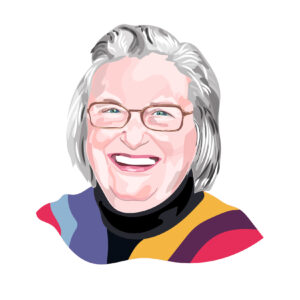 In 2009, Elinor Ostrom became the first woman to receive the Nobel Prize in Economic Sciences for her work as a political economist. Her analysis of economic governance, namely the commons, explores the capability of individuals to manage common-pool resources rather than relying on regulations by central authorities or privatization. She explains this approach to dealing with global environmental problems in her book Governing the Commons: The Evolution of Institutions for Collective Action. She also appeared in the 2012 Time magazine’s annual list of the world’s 100 most influential people, the Time 100.

Born in August 1933, Elinor “Lin” Ostrom was raised as an only child in Los Angeles, California. She joined the debate team at Beverly Hills High School, which impacted her ways of thinking about public policy. Despite her parents discouraging her from going to college, Ostrom went on to attend the University of California, Los Angeles (UCLA) for her BA, MA, and PhD in political science.

During her academic career, she married and divorced her classmate, Charles Scott, before meeting political scientist Vincent Ostrom during his research on water resource governance. The two were married in 1963 and moved to Indiana. Her husband got a job in the political science department at Indiana University while she had to wait a year before being hired due to gender discrimination. At Indiana University, she was senior research director of the Vincent and Elinor Ostrom Workshop in Political Theory and Policy Analysis, Distinguished Professor and Arthur F. Bentley Professor of Political Science in the College of Arts and Sciences, and professor in the School of Public and Environmental Affairs.

Ostrom published Governing the Commons in 1990, showing that under certain conditions, collective action problems can be solved when participants provide their own institutions that are supported by self-enforcing agreements that are consistent with the interests of those involved. Her message was that the tragedy of the commons could be avoided without top-down regulation if certain conditions are met: defined boundaries, proportional equivalence between benefits and costs, collective choice agreements, monitoring, graduated sanctions, fast and fair conflict resolution, local autonomy, and polycentric governance. Her research demonstrated that ordinary people can create rules and institutions to sustainably and equitably manage shared resources. This groundbreaking work led to her being awarded the Nobel Prize. Upon winning, Ostrom donated her share of the $1.4 million award money to the Vincent and Elinor Ostrom Workshop in Political Theory and Policy Analysis.

Ostrom passed away at age 78 in June 2012, after a 6-month battle against pancreatic cancer. She was a dedicated scholar until the end of her life. On the day of her death, she published her last article, “Green from the Grassroots,” about the Rio+20 summit and green policymaking.