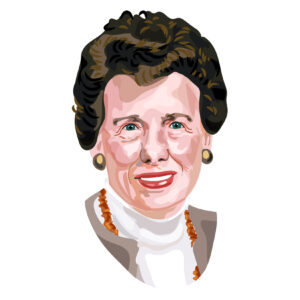 Dorothy May Pine and her husband, Robert, became the first couple in the world to visit all of the world’s 192 recognized countries and 123 territories, island groups and special destinations as defined by the Travelers Century Club (TCC). Known as the “world’s most travelled couple,” Pine was the first woman to have visited the TCC’s 315 locations.

Pine was born on April 24, 1920, in Lawrence, Kansas to Ernest Handsome May and Ester Wilhemina (Abels) May. Lawrence is home to the University of Kansas which Pine attended and she graduated with a degree in nutrition. Here she met her husband, Robert Eugene Pine.

On July 26, 1942, Pine wed her husband, Robert, in San Diego. Robert joined the Navy Air Corp and was a naval aviator for 22 years. The couple had three children, one daughter, and two sons. In 1963, Robert retired and the family moved to a permanent residence in Boulder, Colorado. Pine became a real estate agent for Walter Slack Reality, and Robert worked at the University of Colorado.

While Robert had traveled extensively for his job, covering the Pacific, North Atlantic, and Europe relatively thoroughly, his wife had not. After he retired, they started traveling together. They did not set out to be the most traveled couple in the world, but Pine became the first woman to travel to every country. Their daughter, Judy Young, also accompanied them on several trips. After seeing the world, Pine’s favorite place remained her hometown, Lawrence, Kansas.

Dorothy May Pine died on August 16, 2011, in Boulder, CO at the age of 91. After the couple’s 2006 feature by the Travelers’ Century Club, the two were asked to offer advice and insight, that is now available to the public on International Travel News.